22nd February
A nice warm morning saw good numbers of birds trapped around the station although migrants were thin on the ground with single Whitethroat Sylvia communis  סבכי קוצים and Lesser Whitethroat Sylvia curruca סבכי טוחנים, two Song Thrushes Turdus philomelos קיכלי רונן and a couple of Chiffchaffs Phylloscopus collybita עלווית חורף of note. Visible migration was also slow with reports of sand-storms in the Sahara undoubtedly holding things up; there was however a good selection of bird to be seen with two Tristram's Starlings Onychognathus tristramii

---While Simon and Denes were ringing, on the public side of the  we had a very special event- a birding festival for the local residents of Eilat and Arava. Thanks to a great cooperation with the SPNI we managed to expose over 650 people to the ideas behind ringing and birding and spent 4 incredibly fun hours showing them how birding can be fun and attractive for the whole family! Great thanks to all the amazing people who helped us. (Y.L)---

24th February
A small influx of 15 new Chiffchaffs Phylloscopus collybita עלווית חורף were caught through the morning along with two Lesser Whitethroats Sylvia curruca סבכי טוחנים and a Whitethroat Sylvia communis סבכי קוצים while the Citrine Wagtail Motacilla citreola נחליאלי לימוני and a Squacco Heron Ardeola ralloides אנפית סוף were around the pond. Migration is still fairly slow although a few hirundines which appeared through the afternoon including c100 Swallows Hirundo rustica סנונית רפתות and a few House Delichon urbica טסית and Sand Martins Riparia riparia כוכית גדות gave us hope that this may change pretty soon!

Not with feathers but still nice

On one of the evenings we made an attempt to catch some Scops Owls Otus scopus שעיר מצוי. It didn't come up well.. Instead of ringing an Owl we faced 8 Egyptian Fruit Bats Rousettus aegyptiacus עטלף פירות trapped in our net. All were released quicker than expected, serious relief.

A little more of the local atmosphere 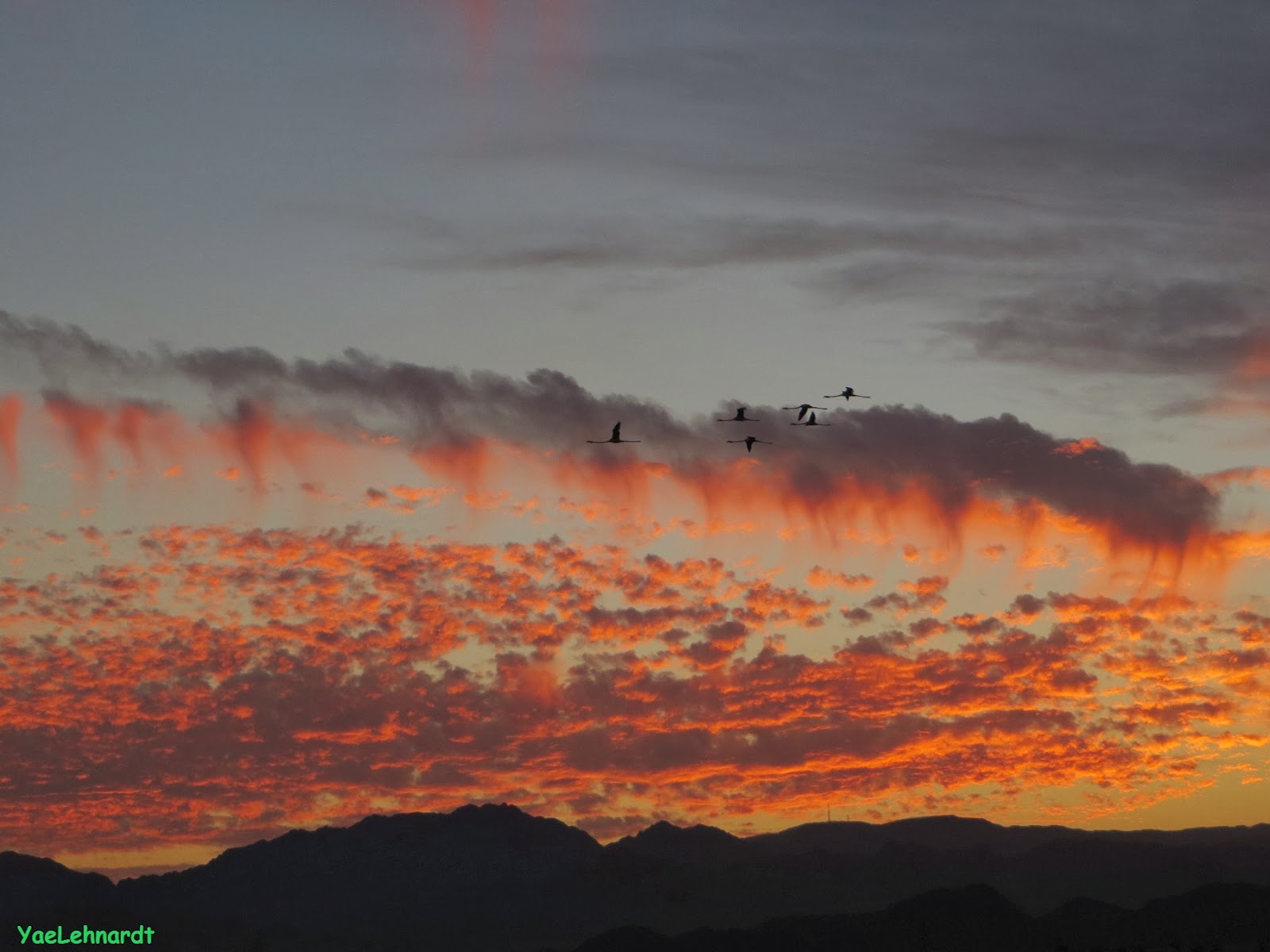 When birding around the Arava valley one can't ignore the incredible sunsets. Picture taken at K19
Posted by יעל לנרד Yael Lehnardt at 15:35 No comments: 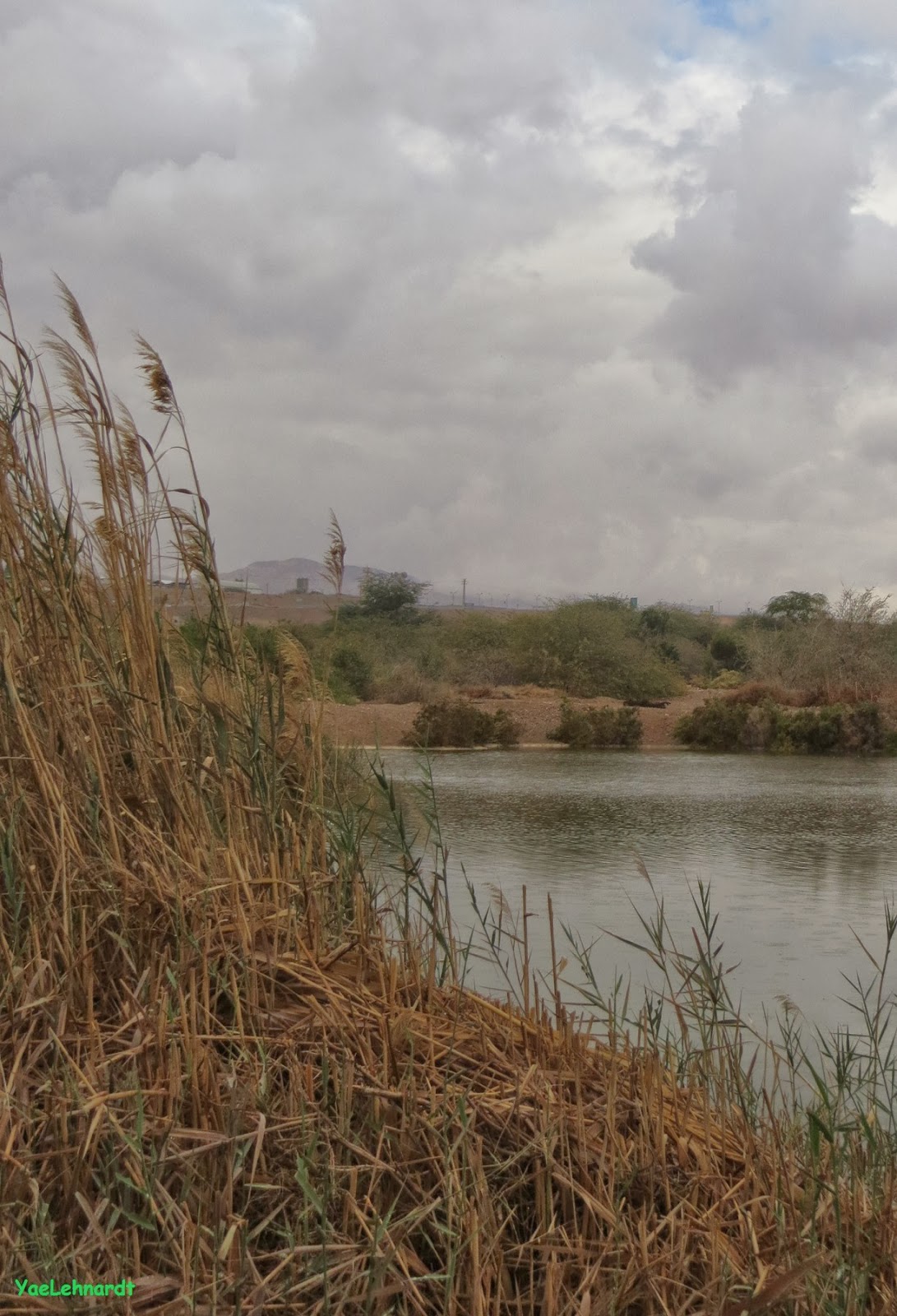 I never in my life thought I'll write it in the IBRCE's Blog but…..the first day of ringing for spring 2014 was cancelled due to rain! Lots of rain!  It was probably brought over by the three lovely girls who came all the way from the Jerusalem Bird Observatory to give a hand - rain is rare in Eilat, much more than Sooty Falcons Falco concolor or Western Reef Egrets Egretta gularis, it rained every now and then through the night before stopping just before first light so we opened the nets, refusing to believe it might rain again.  We were definitely wrong - half an hour later, when 17 birds were in the nets, it started raining.  We ran, took them all out and had to close the nets permanently until the rain stopped.  Surprisingly we were able to open them only the next morning since the rain came in short intervals only.

On the second day we got our compensation- 123 birds of which only 35 were re-traps, species variety was high, especially for our new volunteer-ringer coming all the way from Hungary- Dénes Laczik.  We were not expecting the high variety of Sylvia Warblers- 7 Lesser Whitethroats Sylvia curruca סבכי טוחנים, 4 Blackaps Sylvia atricapilla סבכי שחור כיפה and 3 Common Whitethroats Sylvia communis סבכי קוצים this early in the season.

Two Robins Erithacus rubecula אדום חזה  trapped were on their way back north (we do not have too many un-ringed Robins at the IBRCE during winter, if any) while the first Savi's Warbler Locustella lusinioides חרגולן זמירי of the spring was also caught. 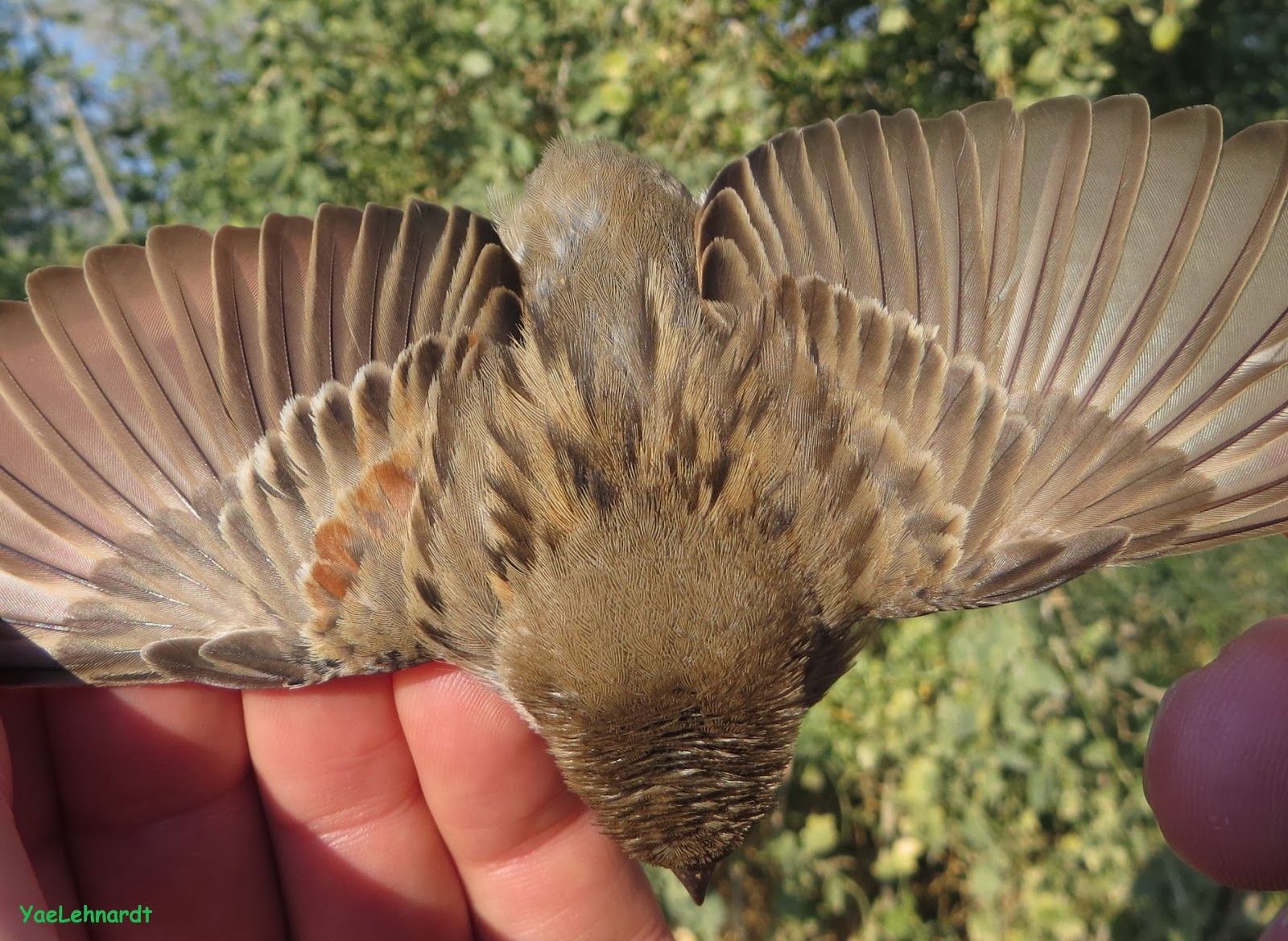 Not with feathers but still nice-

The volunteers camp always attract snakes, I have no good explanation for this given fact. The only snake we've seen around so far was found just next to volunteers-room. It is called Schokari Sand Racer Psammophis schokari
ארבע קו מובהק. In Eilat they are in their light coloured morph and not dark gray as seen in northern Israel.

Posted by יעל לנרד Yael Lehnardt at 13:52 No comments:

Spring migration is sneaking in

As we enjoy last week of preparations till the beginning of Spring season 2014, we do lots of maintenance-works. In between, there are groups visiting the and therefore ringing has to be done! (Don’t worry, we handle this tough situation).

Numbers are still pretty low with no more than 30-40 birds when we do open our nets. Variation, on the other hand, is nice for these earl dates. We already get some migrants, right after crossing Sahara desert, right after escaping from some hunters in Egypt among local species such as House Sparrows Passer domesticus דרור בית, White-spectacled Bulbuls Pycnonotus xanthopygos בולבול צהוב שת, Graceful Prinias Prinia gracilis פשוש and males of Sardinian Warblers Sylvia melanocephala  סבכי שחור ראש that are fighting all the way into the nets.

The first to come from are the Swallows and Swifts (just as described in our last Blog-post). Usually, during migration we are ringing every morning and also few evenings every week. The evenings are devoted for swallow-roost-ringing mainly. But, on 8/2, even before we had the chance to start with our spring program we had a special catch- Pale Rock Martin Ptyonoprogne obsoleta (wing 119mm) סנונית מדבר.  As they fly high up there is no chance to get these unbelievably fast Martins but this one most likely got into the net since Yoav Perlman and I talked about catching this species only two days before.

One round later we were pretty sure we have a big rat at the end of the Heligoland trap (there are usually no rats in the desert so it was weirder than you might think). It wasn't a rat, yet not too different from one: female Little Crake Porzana parva ברודית קטנה.

On the 12th we had one last ringing before opening the season officially (on Sunday, Feb 16th we start ringing daily! Stay tuned!). It was a rather short session but we still had two Common whitethroats Sylvia communis סבכי קוצים.

Sunday it is all starting for real!

I don't know what about you, I'm excited about having one more spring at the IBRCE. Just at the edge of north-east , when millions of birds are crossing, rushing towards breeding grounds making one of the toughest journeys on earth.