The first wave of autumn migration is still visible all around but new winds are blowing, cooler than we can even remember (it's less than with cool winds!! Unbelievable). These winds are now bringing the first birds of second wave- such as the first two Common Redstarts Phoenicurus phoenicurus חכלילית עצים, first Pied Flycatcher Ficedula hypoleuca חטפית שחורת עורף and one beautiful Wood Warbler Phylloscopus sibilatrix עלווית ירוקה.

Clearly we are also catching good numbers of the early migrants- first wave of autumn but some species are almost gone- like the Olivaceous Warbler Iduna pallida שיחנית קטנה.

Surprising good numbers of Namaqua Doves Oena capensis תורית זנבתנית were ringed so far (4 at the IBRCE Park, 2 more at the fields of Qetura) and we are expecting more of them due to very good numbers of the seen around. These tinny pigeons have almost nothing in common with pigeons; maybe that's why I love them so badly.

In addition to "normal ringing" program, we are also activating Bee-eaters Merops apiaster שרקרק מצוי ringing program. The agriculturists of the Arava are using bees for pollinating their fields and it is now the pick of Bee-eaters Merops apiaster שרקרק מצוי migration. The Bee eaters apparently believe the Bee hives at the fields are placed there especially for them but if to be honest, it is there for producing food for humans…


To prevent violent fight we trap the bee-eaters and release them a bit further south where they can eat natural food and keep safely south to .

In contrary to the birds, migration northwards was also recorded at the station this week- I'm leaving and moving north to start with my university studies- after an incredibly good, fascinating, fun… year at Eilat I have to leave but I'm leaving the station in the hands of my great friend and colleague – Noam Wiess. Noam worked at the Park in the past and just came back to the area as a (renewed) worker of both the SPNI and the IBRCE (who are working in partnership). Of course, the rest of the staff is here as well, keeping this place home for birds and humans all together.

Posted by יעל לנרד Yael Lehnardt at 08:46 No comments: 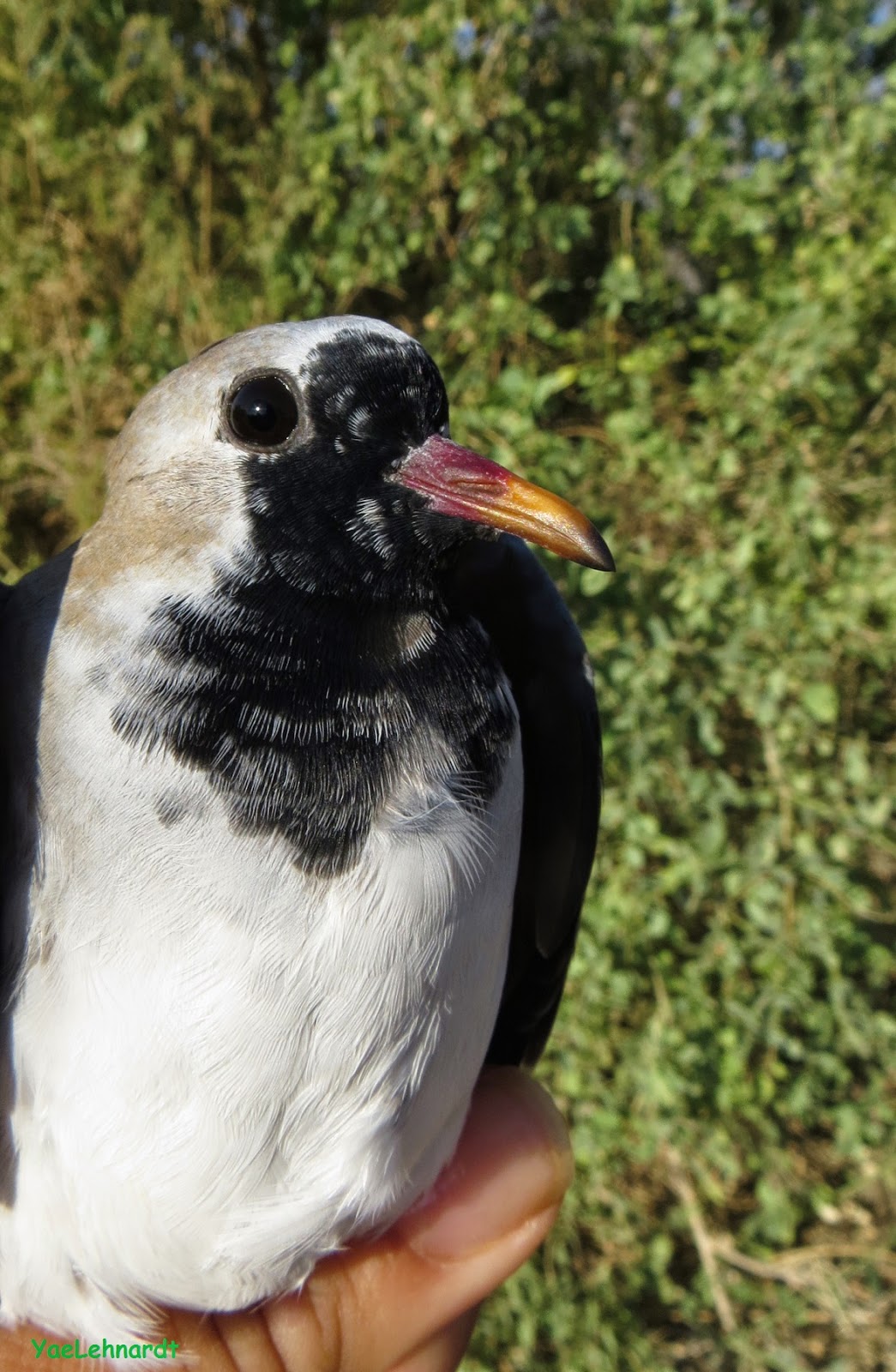 Perhaps lots of tourists have decided not to visit this autumn but the birds clearly disagree and show it with their wings… Another great week by the southern end of great birds, all around, every day, for nearly two weeks now!

We did have some slow days but once again, species variation was incredible!

6/9
79 birds.
Just one morning after posting the blog, there were too many things to share:
We had one Willow Warbler Phylloscopus trochilus עלוית אפורה with a unique earring- a huge ant was clinging to the wing, right by the outer joint.
The ant was dead but kept on grabbing the wing of the Warbler. We released it after cutting the ant, since it was impossible to take it out in any other way!

For me, the best bird of that day was a wonderful Crested Lark Galerida cristata עפרוני מצוייץ.

9/9
66 birds, of which one weird House Sparrow Passer domesticus דרור הבית- who has odd bill: 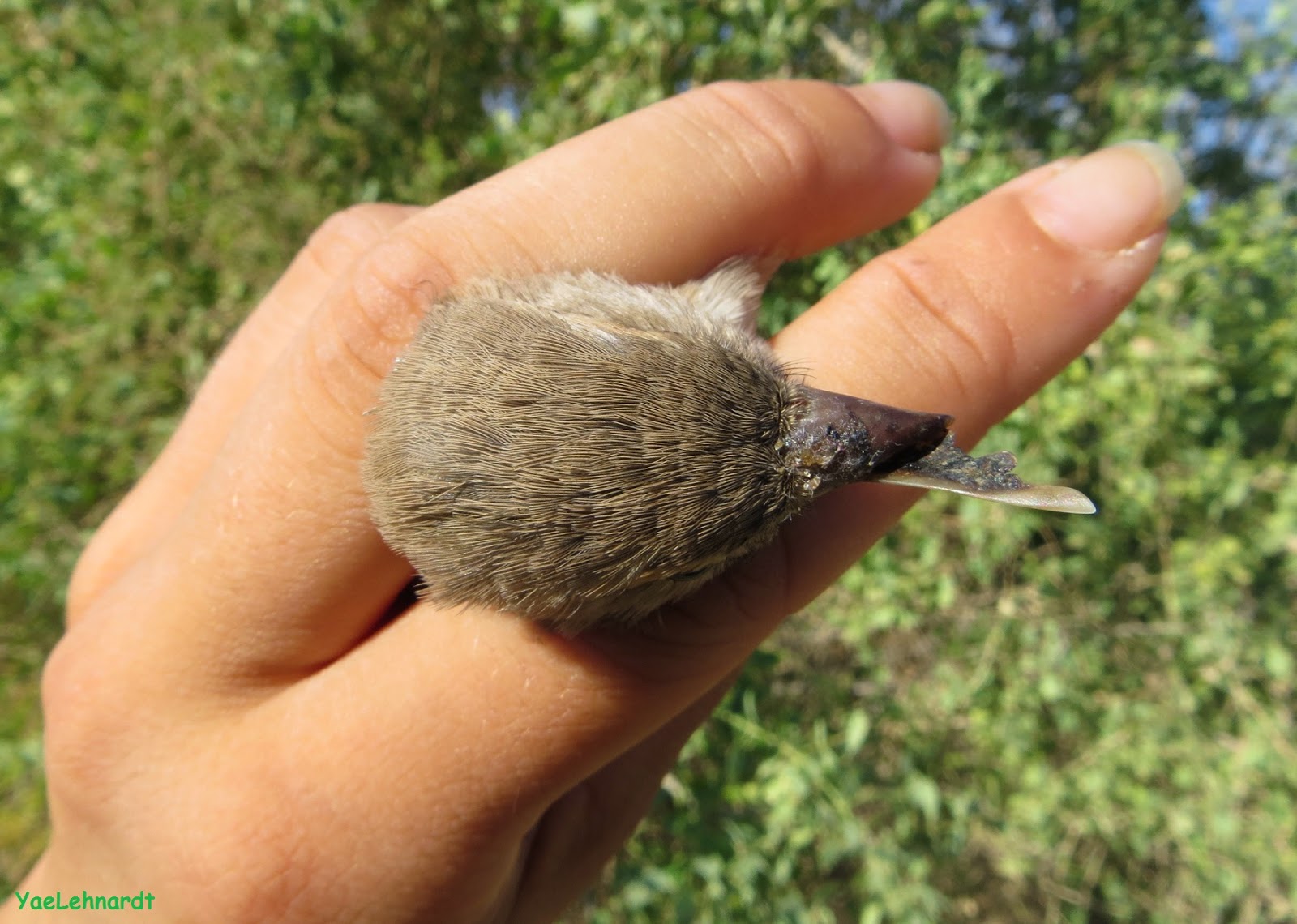 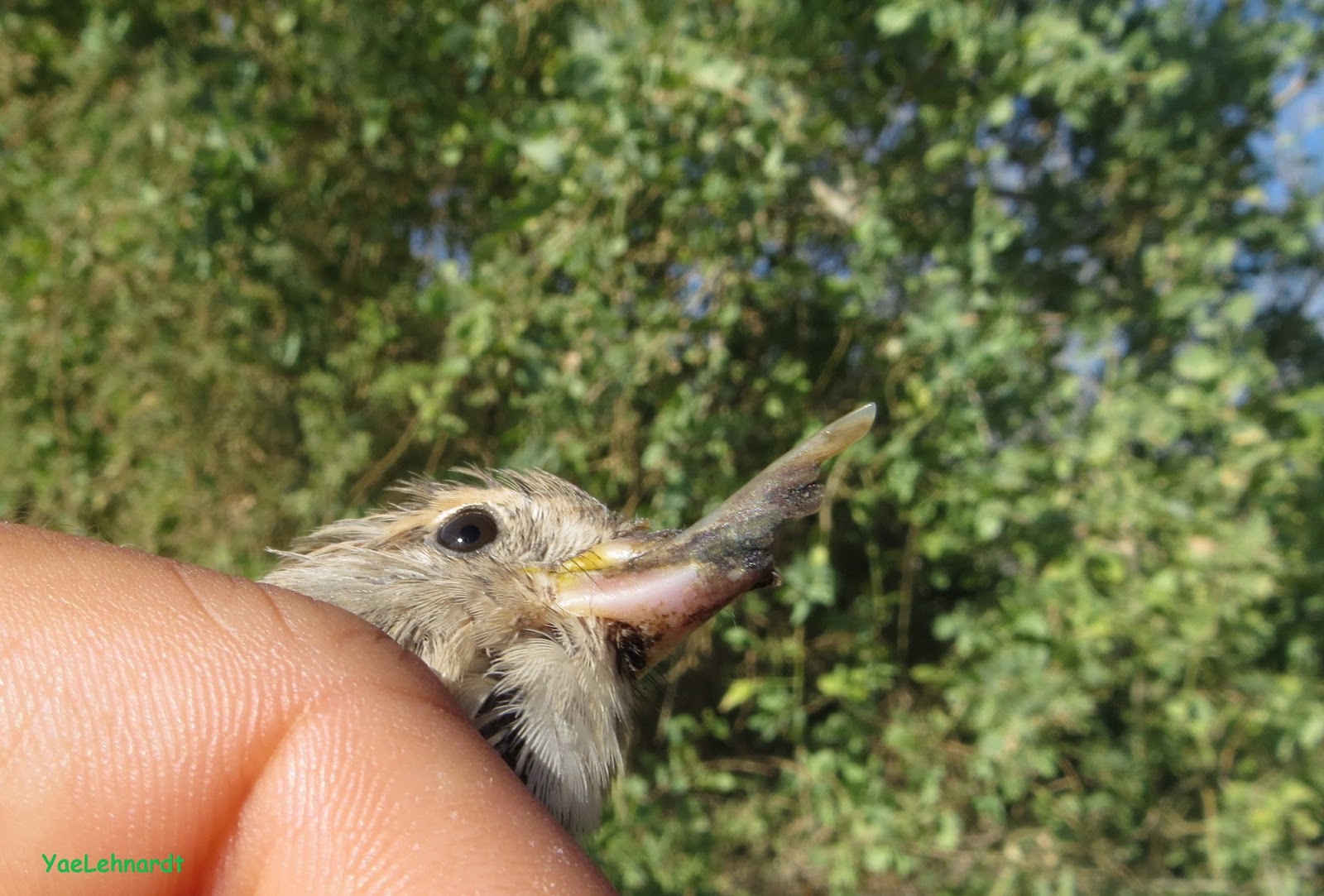 Surprisingly, it is in good physical condition- with some fat and over 23gr.

10/9
67 birds.
The best was one juvenile Common Rosefinch Carpodacus erythrinus ורדית אירופית. They are not rare in this time of the year but for example last autumn we had ringed a single bird during season.

In one round we had an explosion of goodies:
1 juv. Male Namaqua Dove Oena capensis תורית זנבנית 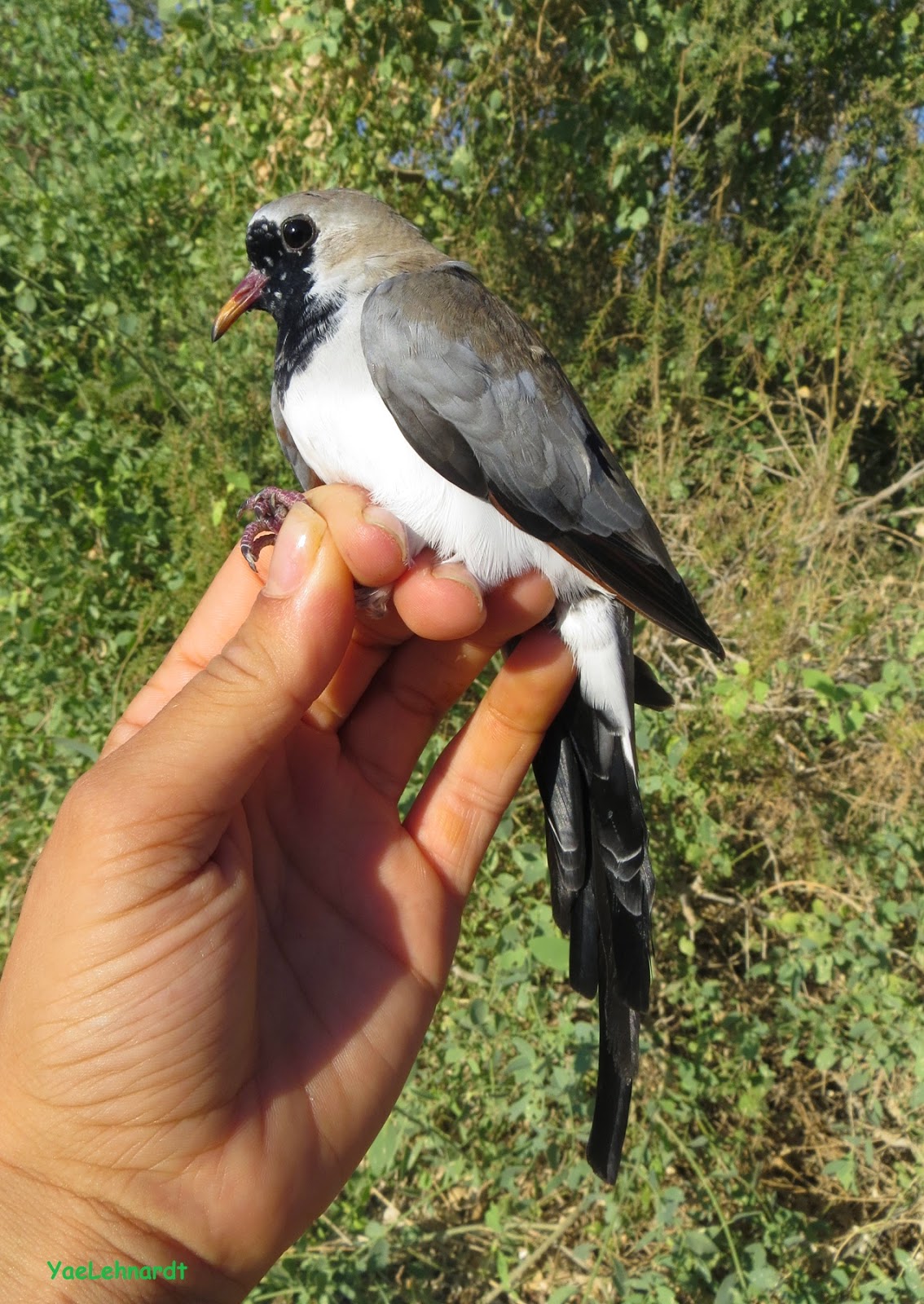 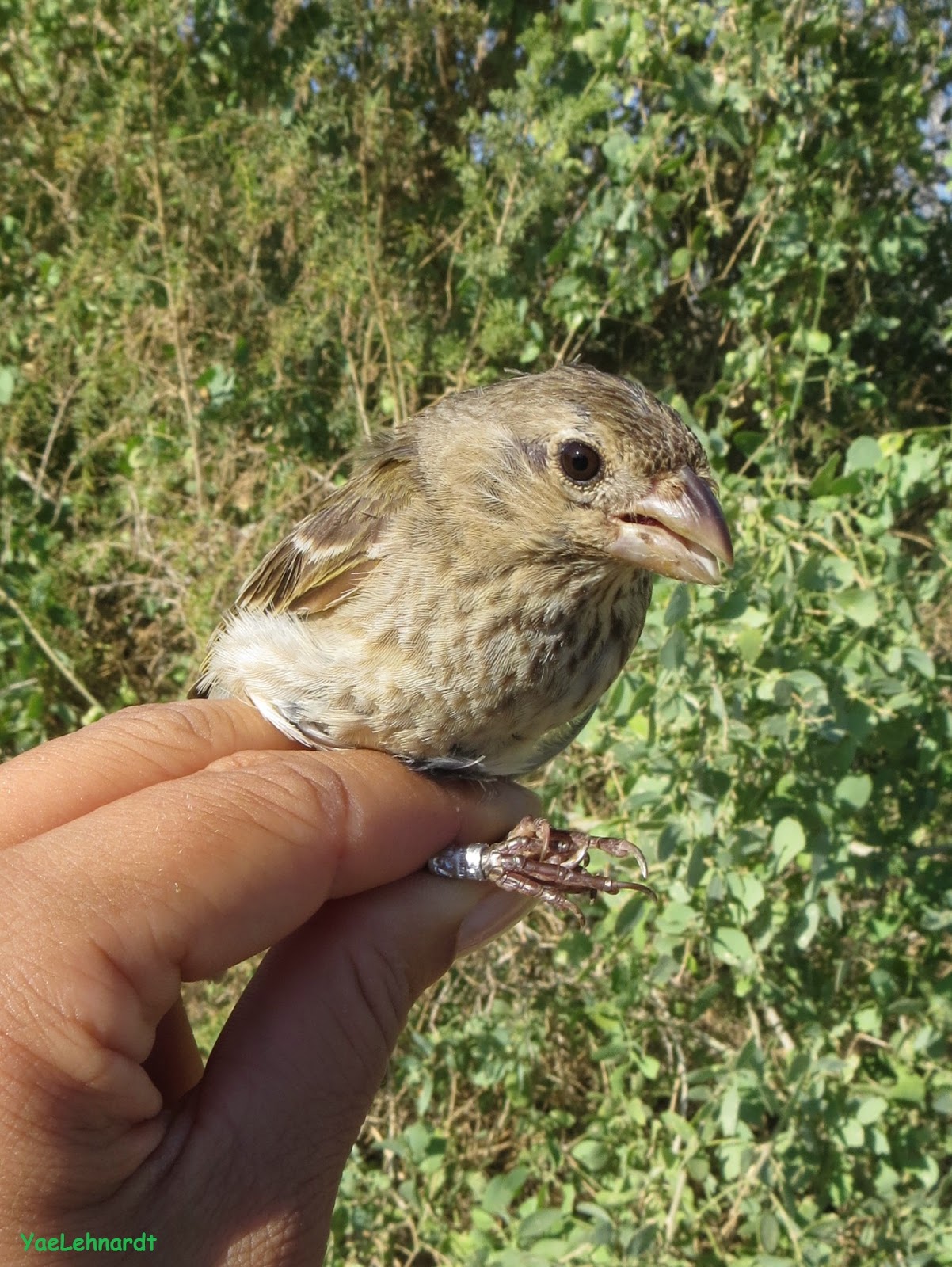 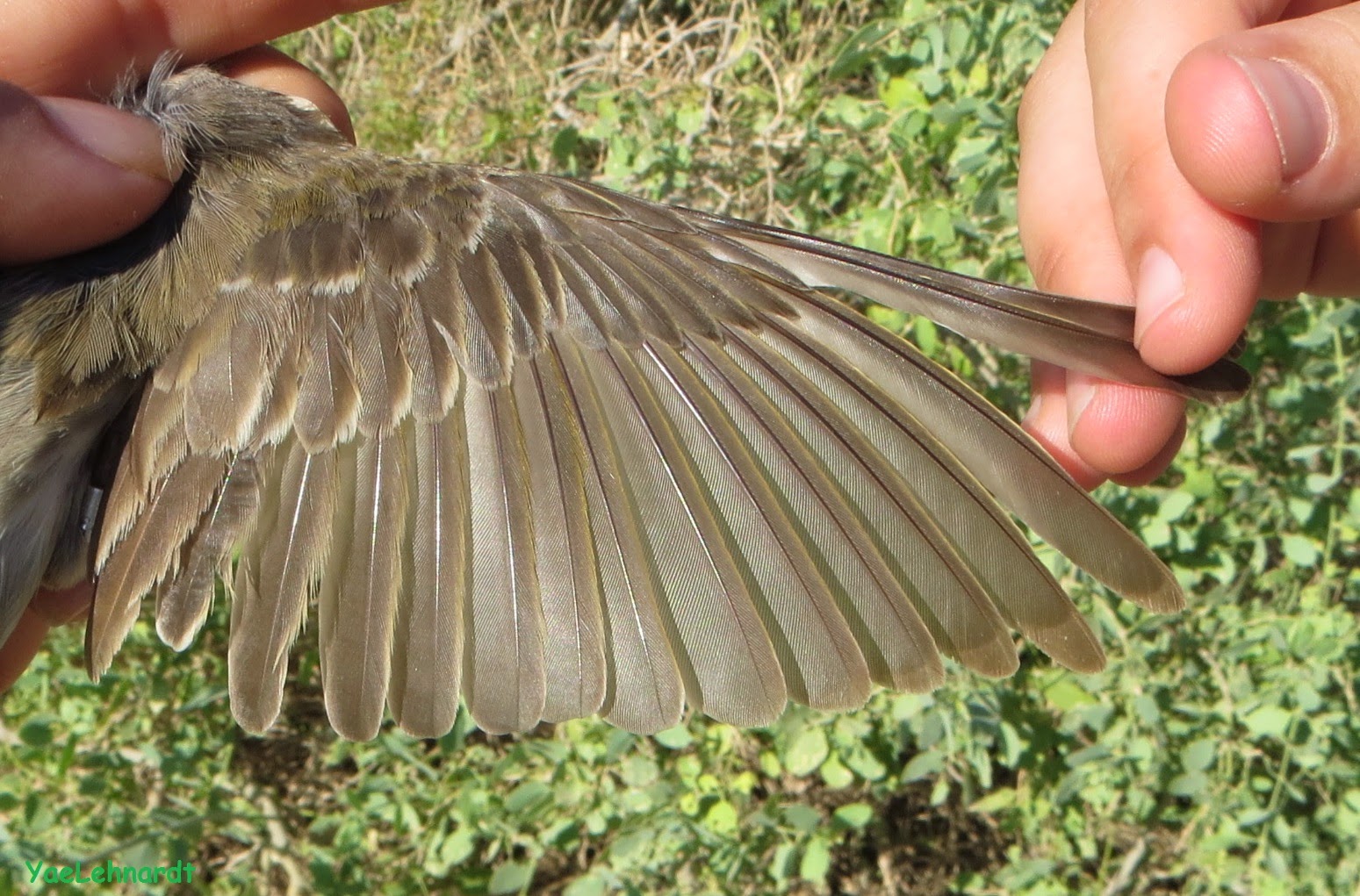 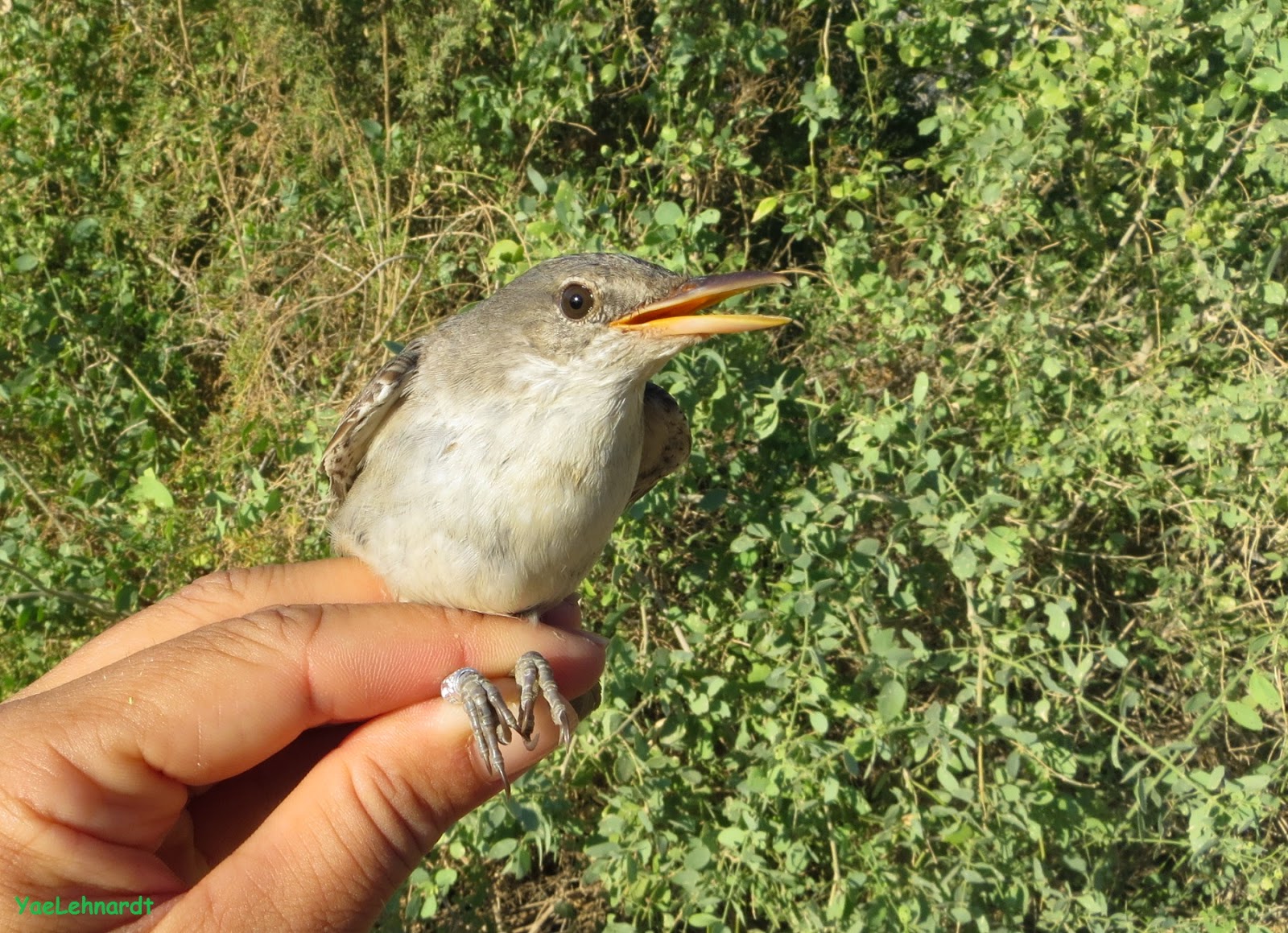 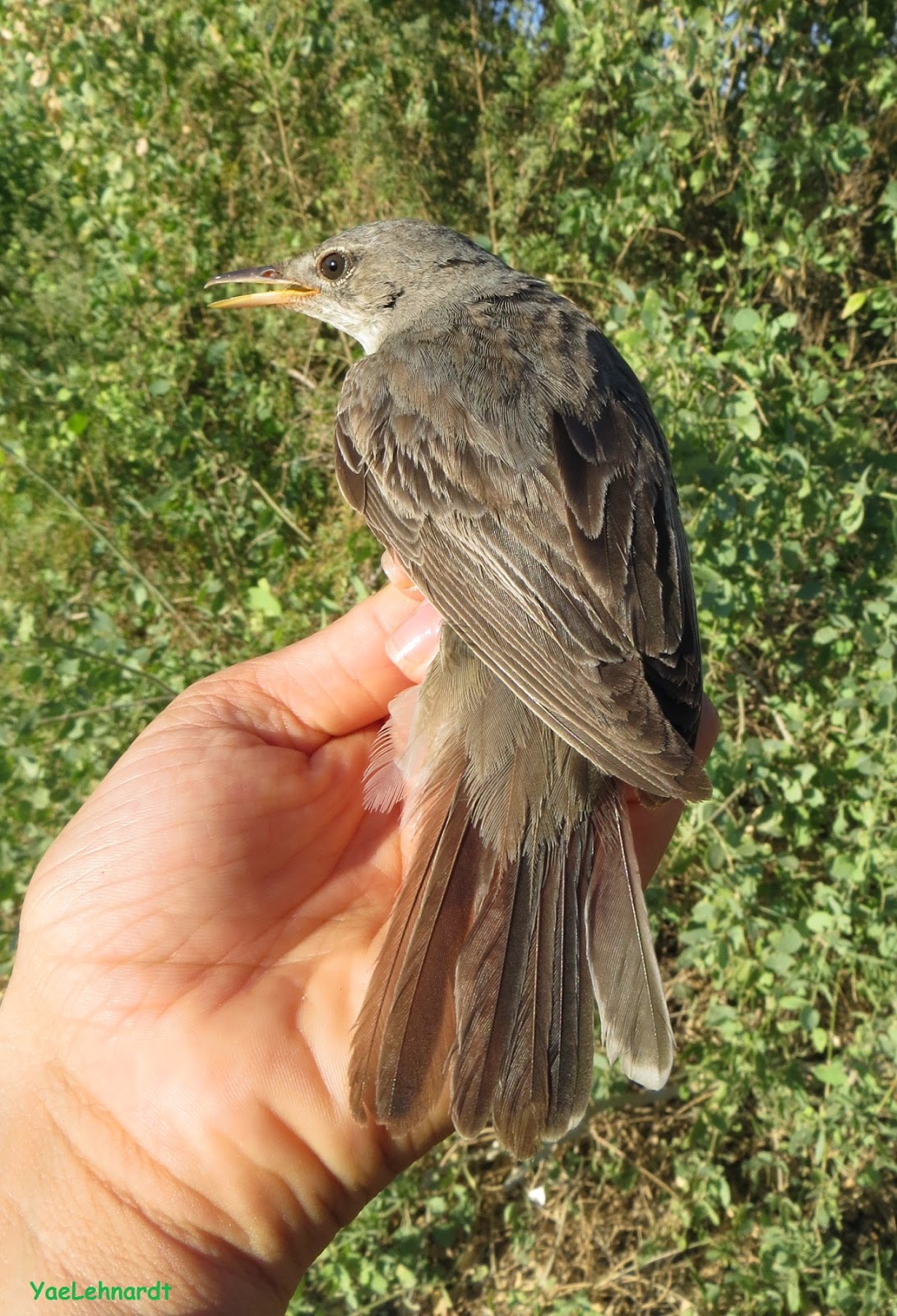 12/9
79 birds. Started early with some Barn Swallows Hirundo rustica סנונית רפתות who spent the night by the reed-bed surrounding "" and jumped into the nets to get some rings.
Later on, once again, growing numbers of Masked Shrikes Lanius nubicus חנקן נובי were noted (4 ringed but many more around, probably waiting to get ringed tomorrow morning) together with Spotted Flycatchers Muscicapa striata חטפית אפורה (2 ringed, more around).

One of the two Spotted Flycatchers Muscicapa striata חטפית אפורה was showing an interesting moult pattern - retaining some old Primary coverts and Secondaries pointing out the fact it is a Second calendar-year bird (Euring code 5) while most adult birds cannot be separated due to their winter moult (given Euring code 4).

On the 7th, right after a perfect birding afternoon, Aylon Zvik and I found a special bug, something I could tell I haven't noticed here ever before. I'm definitely not an entomologist but big bugs always attract some attention. After uploading it to a special Facebook group we were told that it is the somewhat rare Monocladum aegyptiacum יקרונית מצרית. There were two of them by the ringing station and they weren’t relocated since, despite some eager entomologists who are likely to twitch them (could you believe?! Twitching bugs!).

Posted by יעל לנרד Yael Lehnardt at 16:59 No comments:

Eilat is under attack- of Shrikes!!!

During summer we ring every now ant then, trying to monitor the birds around without annoying them with too many unneeded re-captures. August is already crowded is migrants but the heat doesn’t allow us to ring for 4 hours every day like we to during monitoring season. While ringing shortly on August 28th we were feeling like the season is on- We caught a Reed Warbler Acrocephalus scirpaceus קנית קטנהwith a ring from . We are still waiting to get more info from their ringing center… 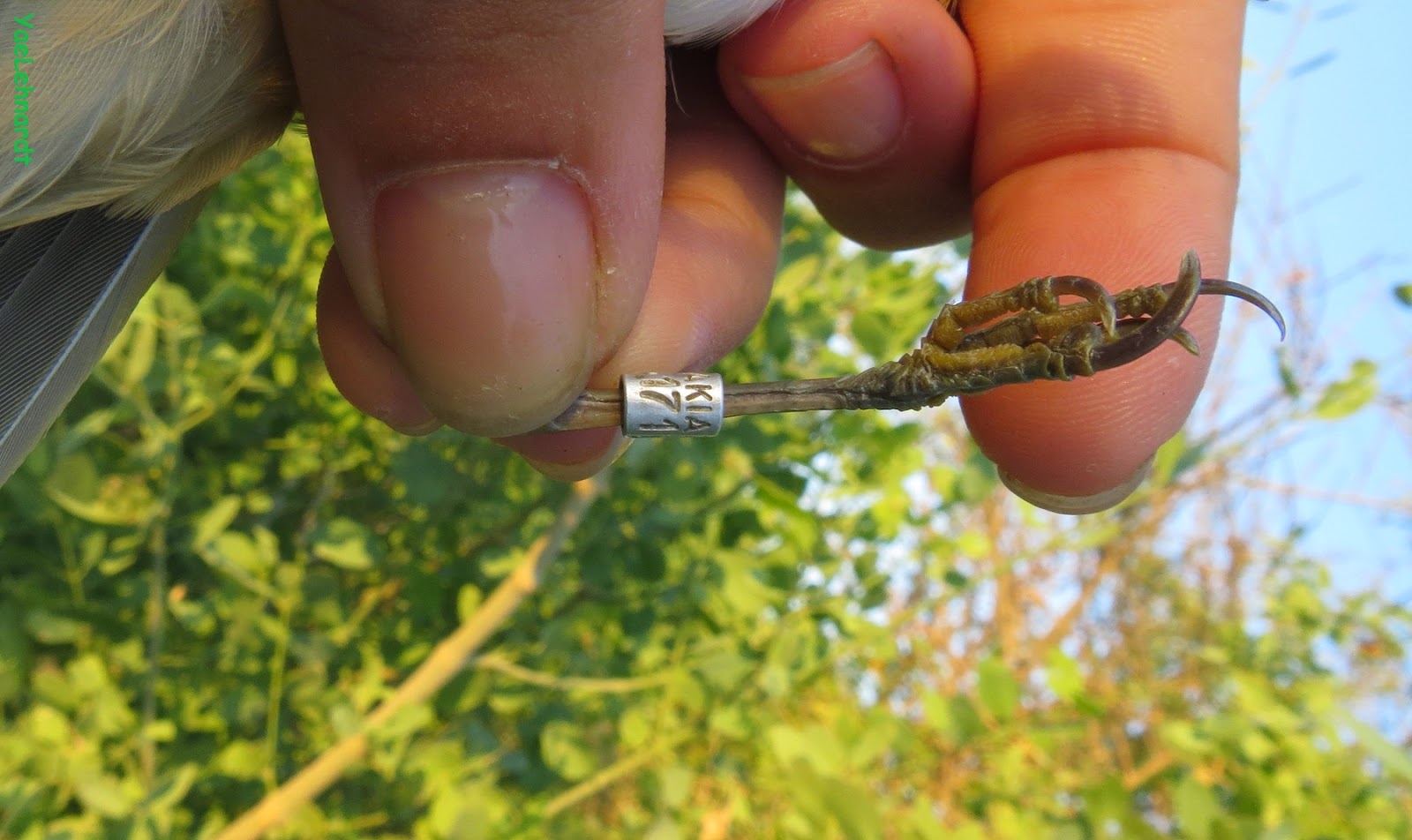 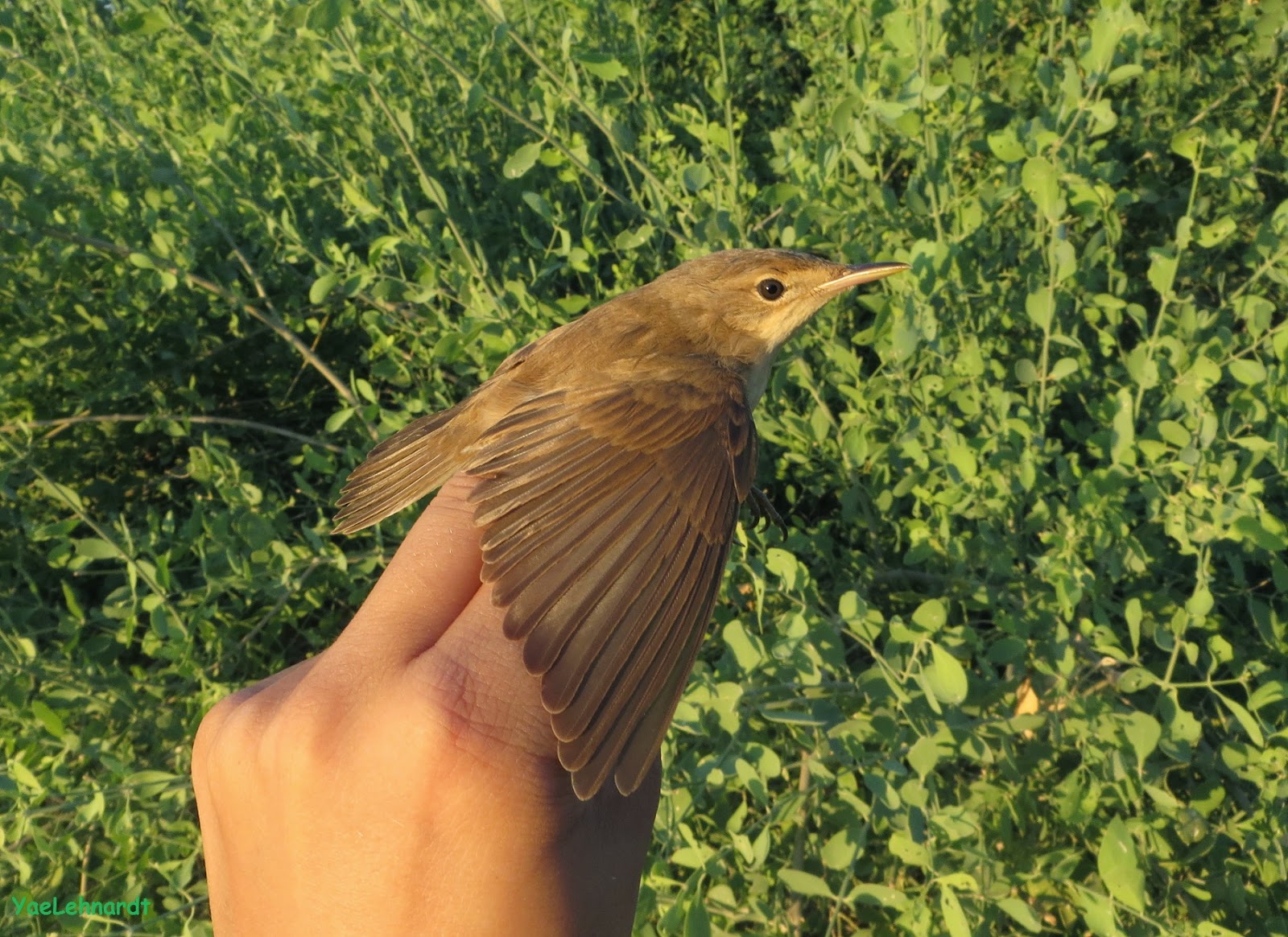 Autumn ringing season had started on Sept 1st. We ring daily and every day is a surprise party..!
So far we ringed 403 birds in 5 days (61-111 each day) but the best part is the species variety! Loads of cool species were ringed till now, I'm sure there are many more on their way. It's almost impossible to share all the great stories and all the happy faces of the volunteers who came to help with the ringing and enjoy migration but I'll try to note some of the better species we had each day:

Low expectations, new ringing season is always a reason to be optimistic but a very hot day seemed not to be the best for opening. Eventually e were all amazed by catching 66 birds, 20 species, including:
2 Barred Warbler Sylvia nisoria סבכי ניצי 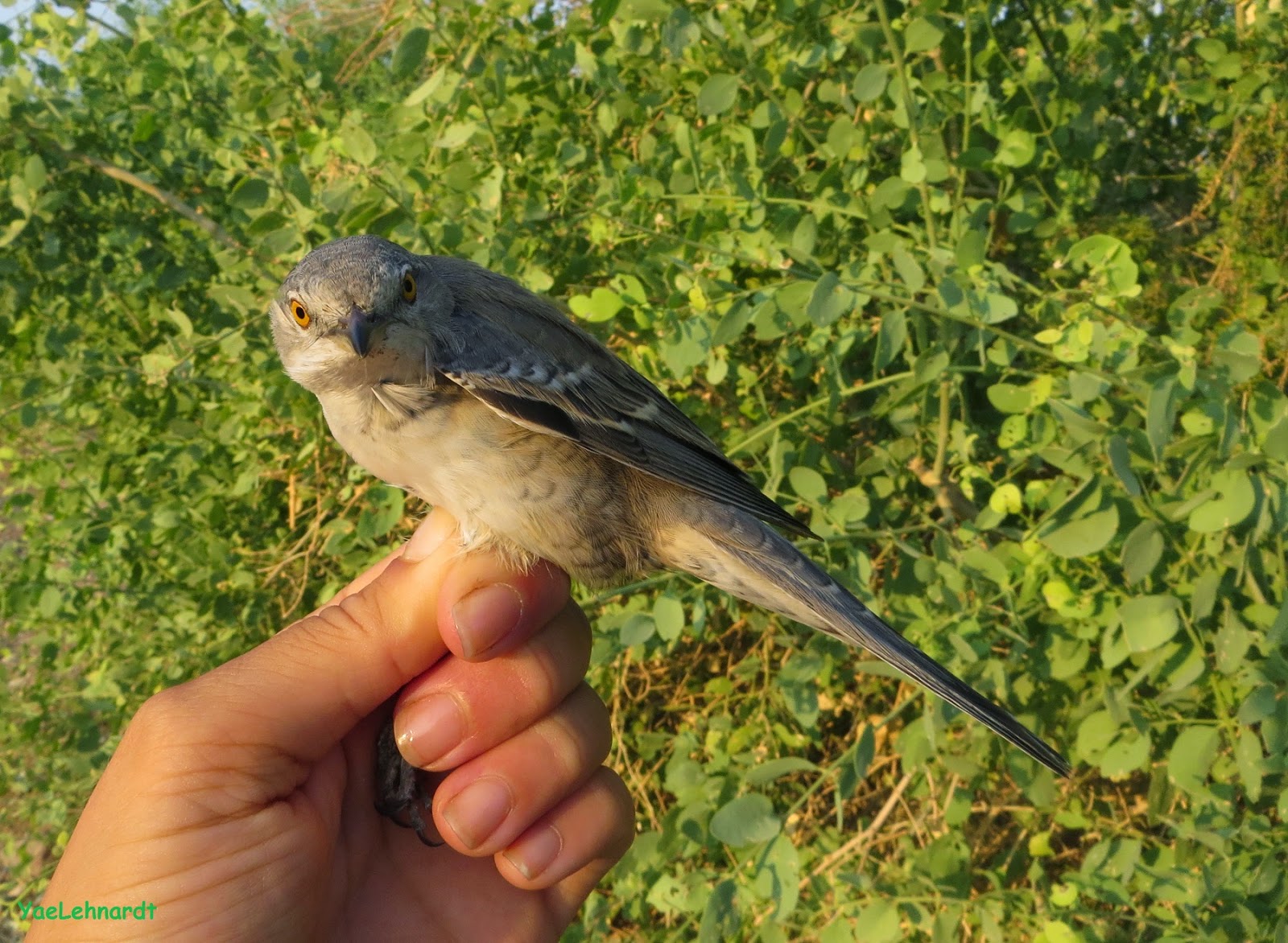 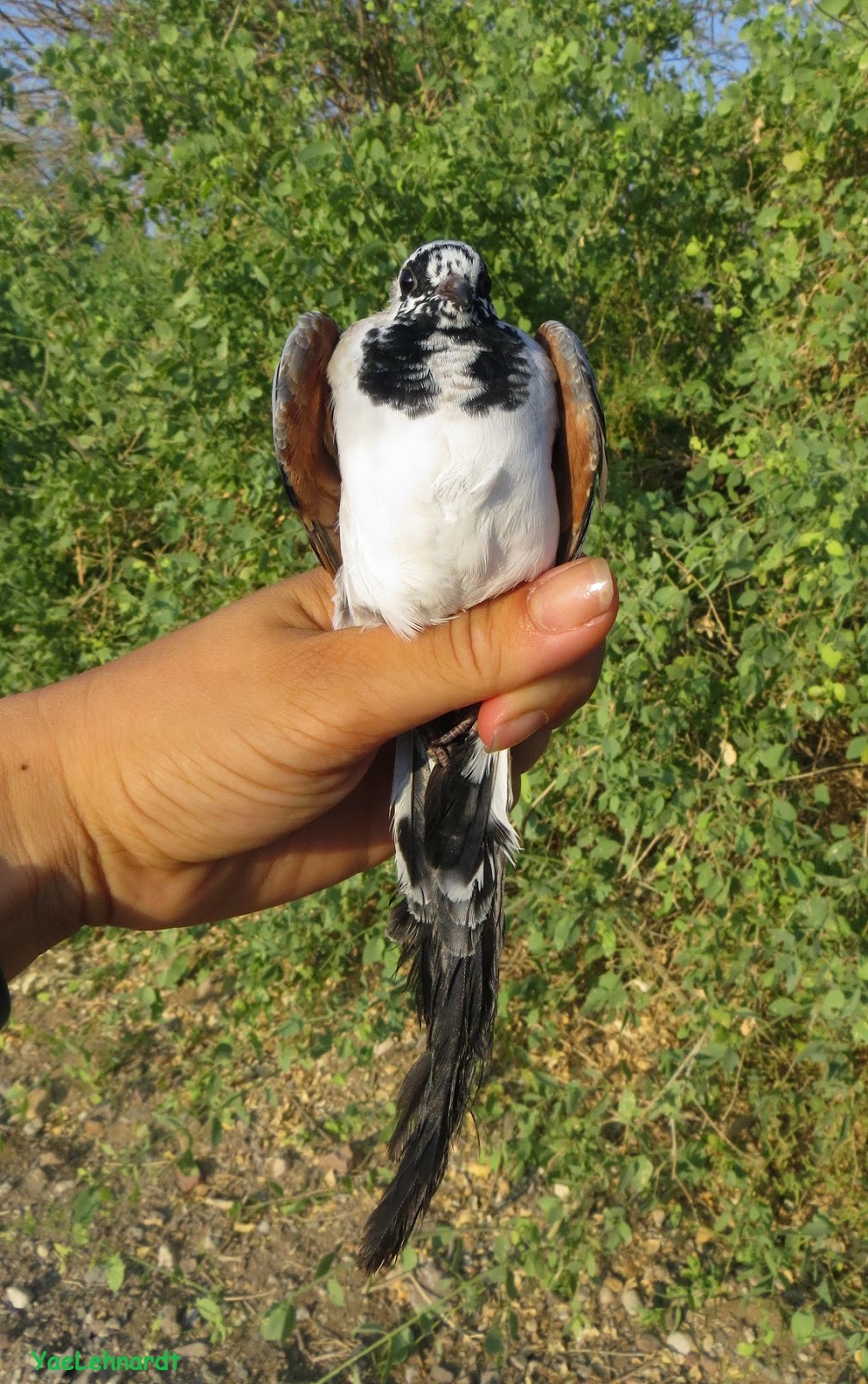 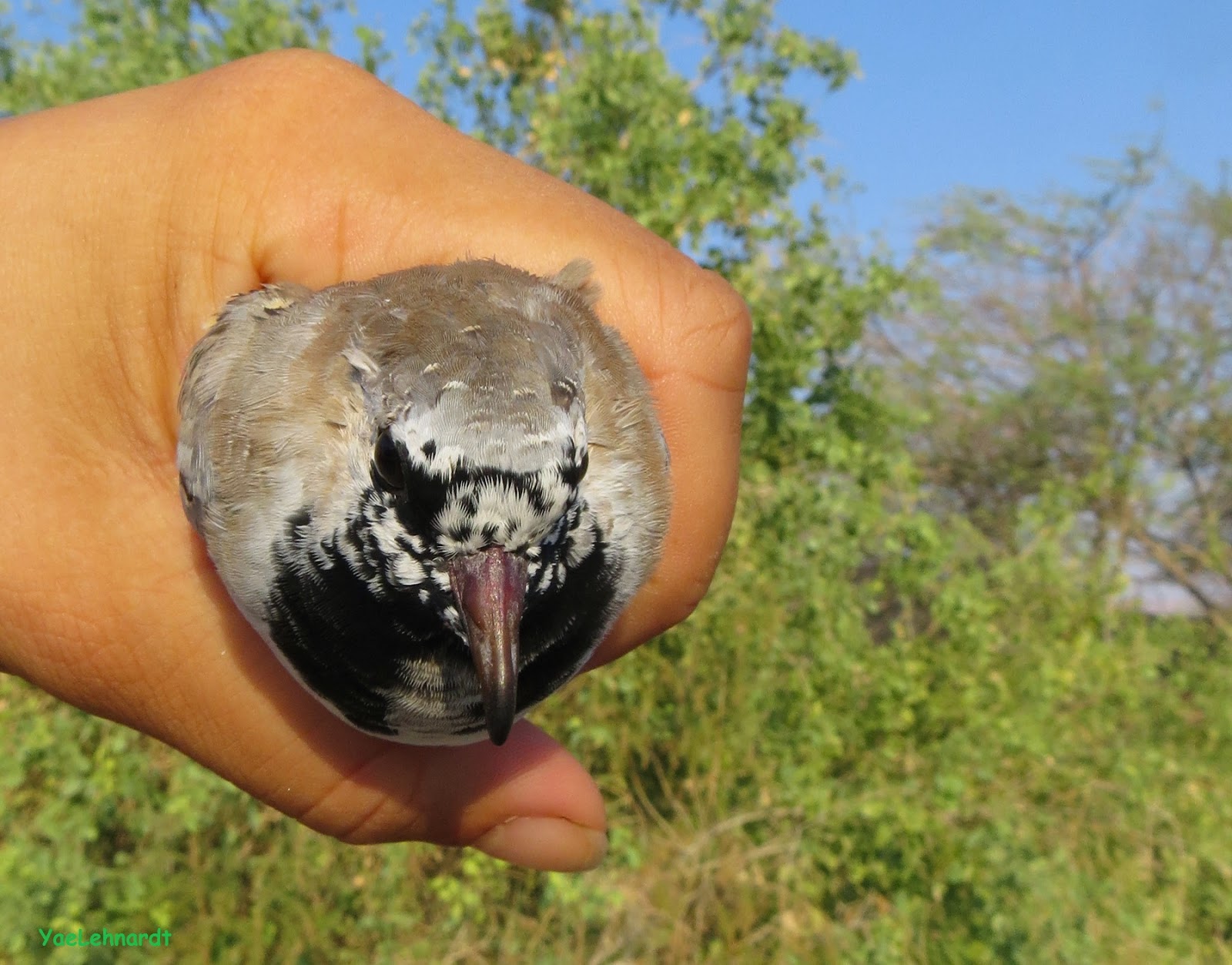 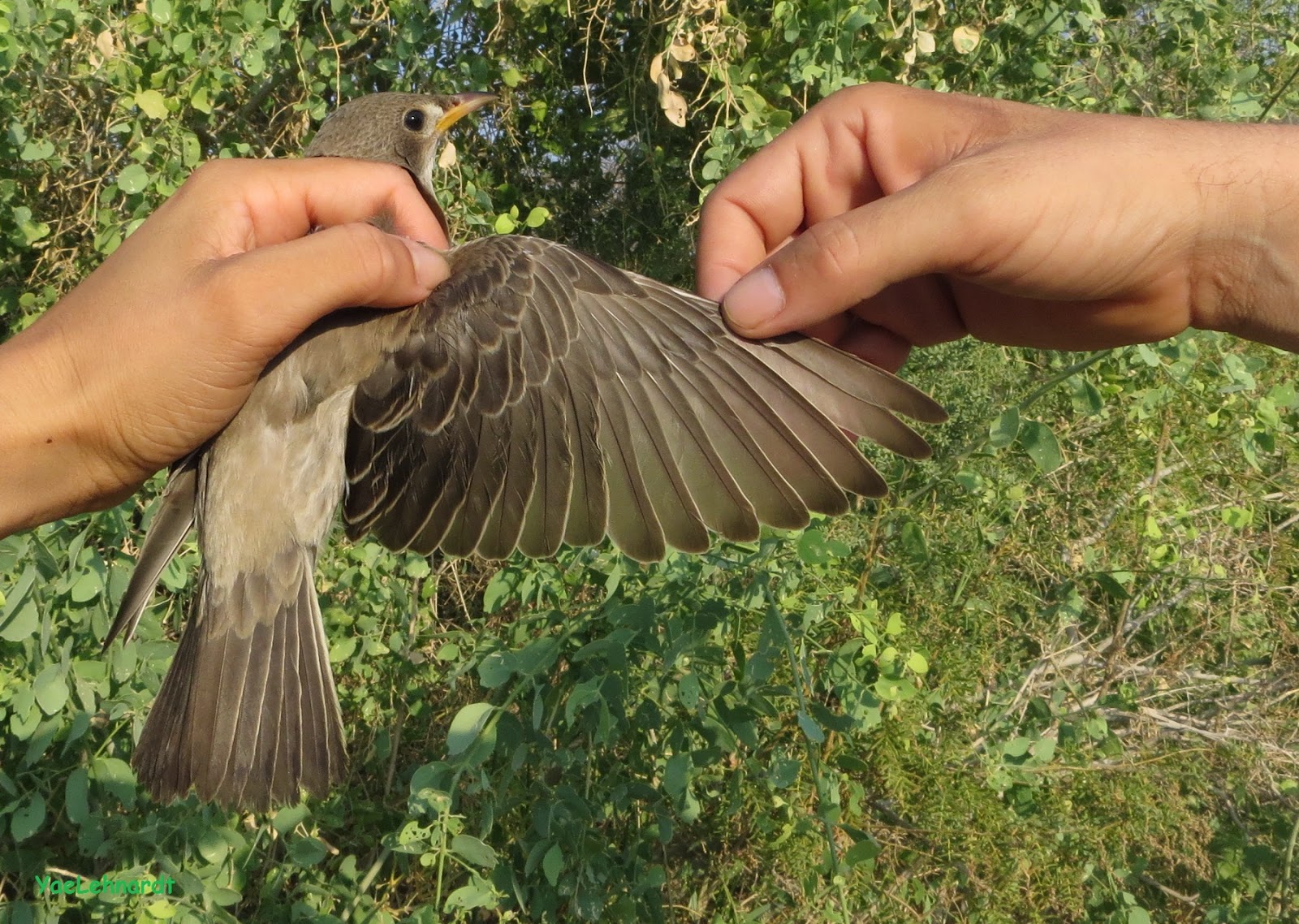 Higher expectations, but we weren't even close- it was much better than we thought because at night somebody changed all the birds around.
We had 88 birds, 19 species. 22 Shrikes!! It hurts! 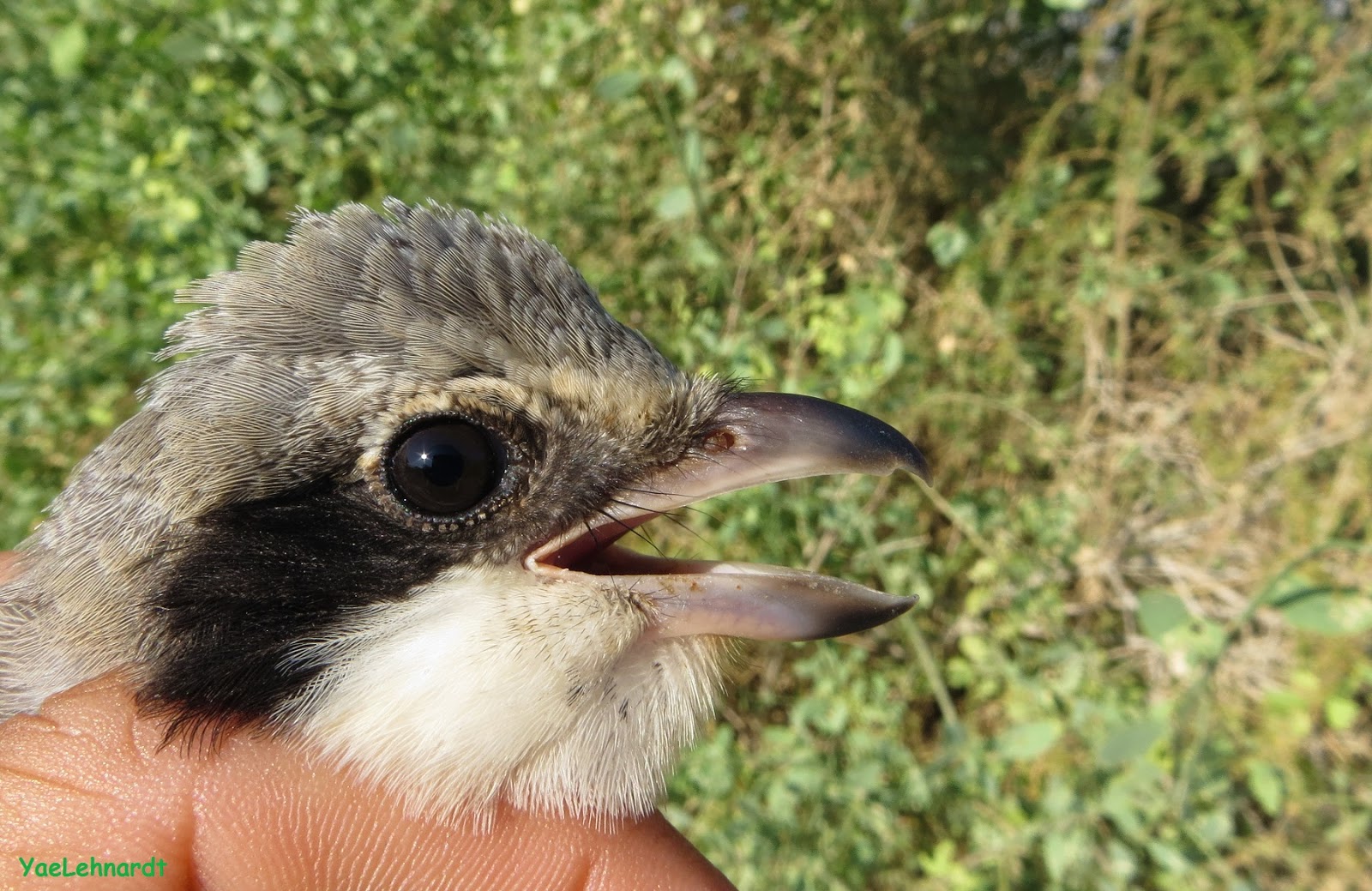 We new it can't stay so good, we knew this day must be boring. Well guess what- It wasn't! Another great day with lovely people and amazing birds.
Only 61 birds were ringed, only 16 species but… 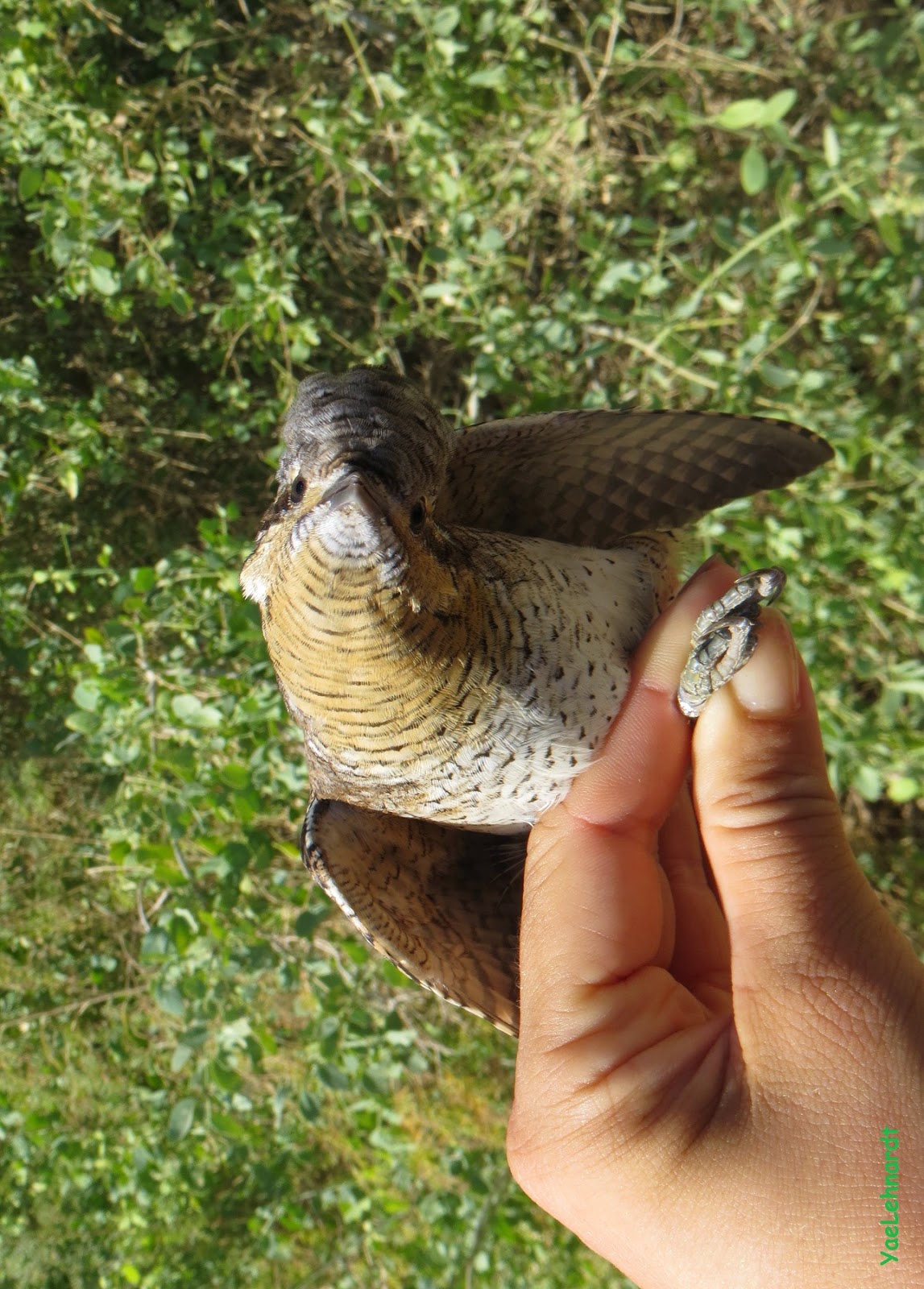 and the best of all: 1 juv. Blackstart Cercomela melanura  שחור זנב
They are regularly seen around Eilat region but are rarely caught at because it is so vegetated. I've never ringed any Blackstart at the Park before! 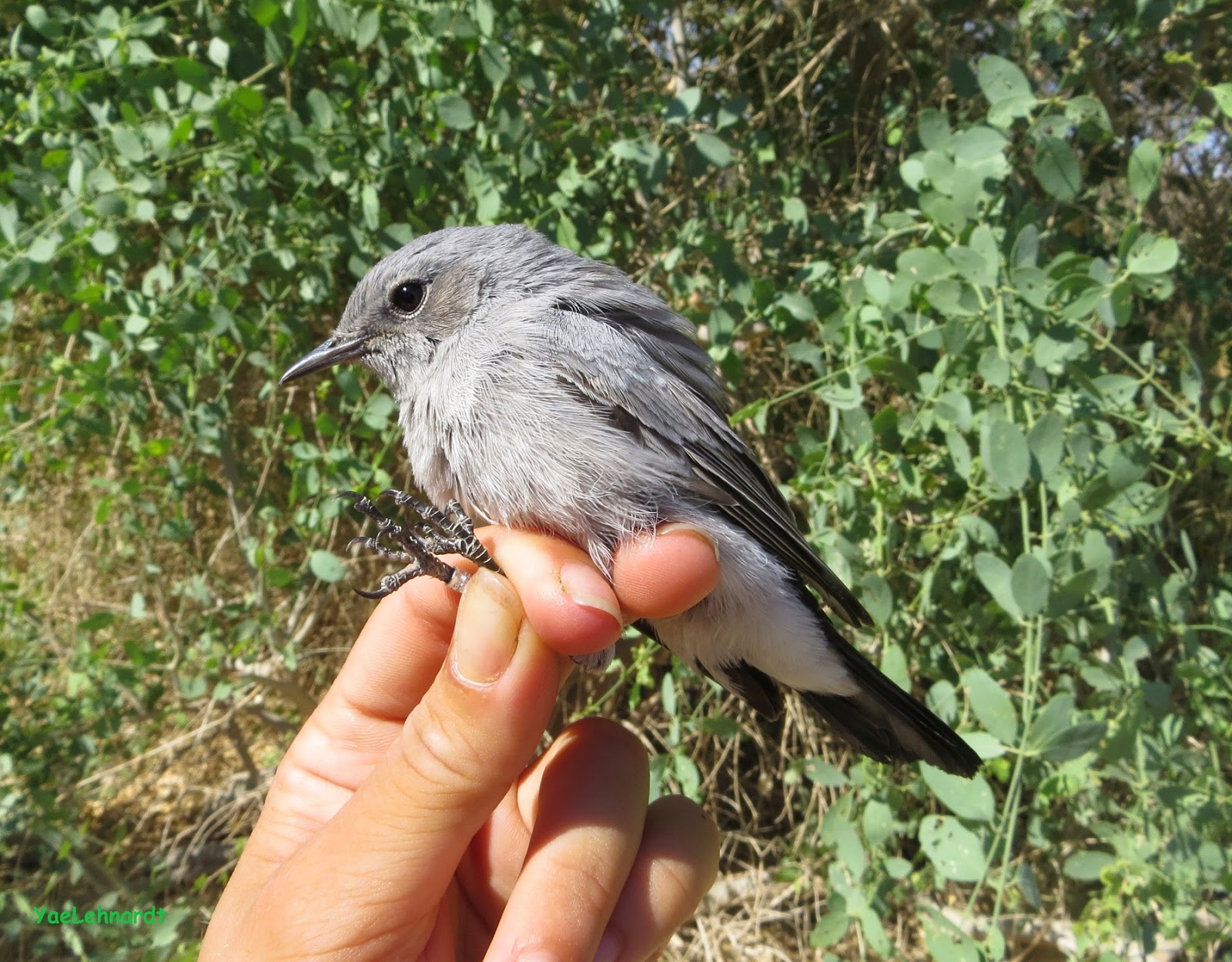 Beautiful hot morning. Once again a wave of Shrikes arrived at night and hurte our fingers all day (or the leftovers of the fingers).
111 birds were ringed, best day so far.
Another Blackstart Cercomela melanura  שחור זנב was ringed early in the morning, maybe part of the same family?
In general we had more of the same (great variety, have I mentioned it before?)
and the best of all: 10 Arabian Babbler Turdoides squamiceps זנבן jumped all together into one net, calling and squeaking! Pure fun and lots of poop…! 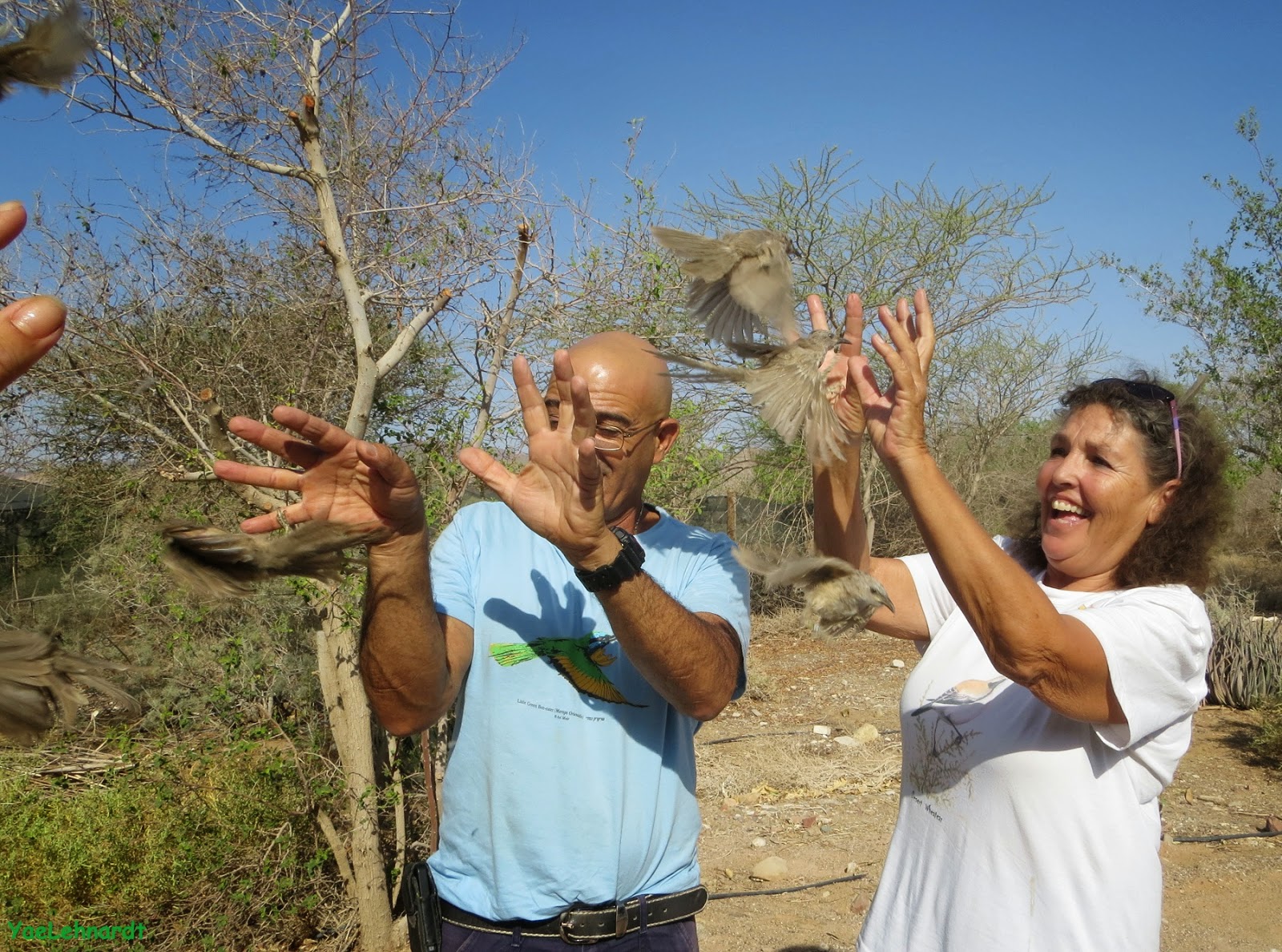 We'll see what brings us the next night!
Wish you a lovely weekend and happy migration wherever you are.

Posted by יעל לנרד Yael Lehnardt at 13:50 No comments: