In addition to the migrants, we had some nice local birds, one every day for four days in a raw! Namaqua Dove Oena capensis תורית זנבנית. Sometimes it's not about the rarities but about the nice/interesting/hard to get/local/combo! all together!! :)

April 21st
Like a Swiss clock, every year, the Levant Sparrowhawks Accipiter brevipes נץ קצר אצבעות arrive on the very same dates. It is normal to see some random early ones (like the one that was seen during the Bird Festival in March) but from 20-21 to 25-26 there is always a good steady stream of Sparrowhawks overhead. On the 21st it started but didn't end till few days later!

The ones who came in crazy delay are the Blue cheeked bee eaters Merops persicus שרקרק ירוק. Maybe they should ask the Levants when to leave Africa since they came in exact one month too late. They are regularly seen on the last week of March, just before first European Bee eaters Merops apiaster שרקרק מצוי but not this year. On the 21st we saw a flock of 7 during most of the day, few more were seen on the next days.

Another colourful species we saw around is the Roller Coracias garrulus כחל. Two were seen along the morning flying around and perhaps same two were observed at K20 in the afternoon.


April 22
Another good day of Sparrowhawk migration. During the morning over 550 passed in low flight over the IBRCE Park, we noted about twice this amount in the afternoon over the city. We just couldn't blink!
In addition we had 450 Honey Buzzards Pernis apivorous איית צרעים
and 150 Steppe Buzzards Buteo buteo vulpinus עקב מזרחי


April 23rd
It was a cool morning! In one round we ringed
Levant Sparrowhawk Accipiter brevipes נץ קצר אצבעות
Scops Owl Otus scopus שעיר מצוי (late! time to be already in breeding grounds)
And a Hoopoe Upupa epops דוכיפת (our national bird) 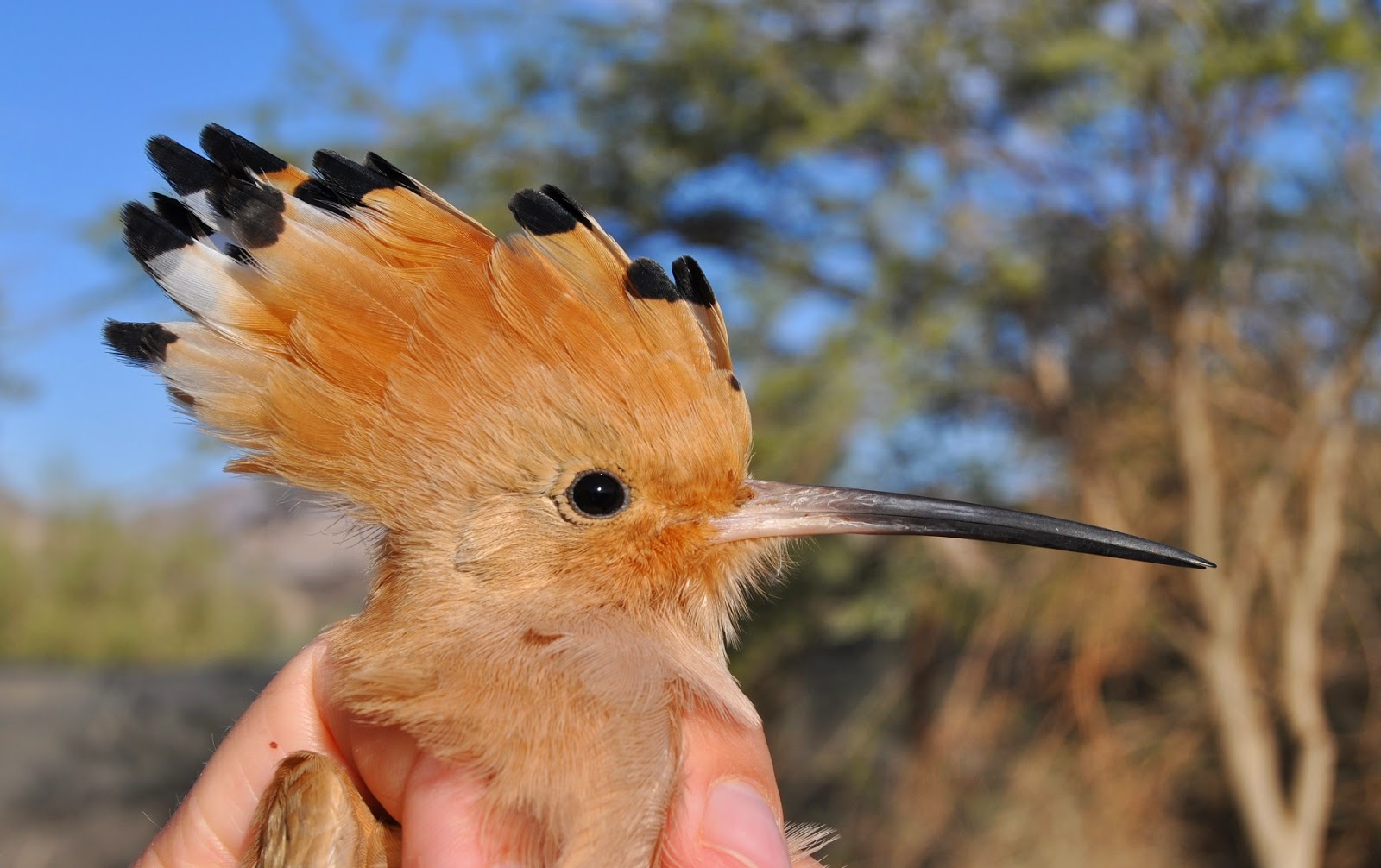 We shouldn't forget mentioning the strong migration of White Winged Black Terns Chlidonia leucopterus מרומית לבנת כנף during this week. Mostly seen by the Northern Beach of Eilat (few thousands so far) but also at K20 Salt ponds and over the IBRCE Park. On the 23rd we noted 180 of them flying over.

April 24th
During the morning we had great fun with about 30 visitors- the Monitoring course of the SPNI, sponsored by the EU. Great essential move if you ask me in person.
We did our best to indulge them with the best IBRCE had to offer and they sure did enjoy it! I wish you many more great experiences.
In the afternoon we went to watch some birds by the northern beach of Eilat. A great site when looking for a perfect place to enjoy birding right before sunset and the 20 min after.
We enjoyed all usual goodies (as detailed in last post) and added a "needed" species for Roni's list- an Israeli rarity: Red breasted Merganser Mergus serrator מרגון בינוני. It is most likely the same bird that was seen several times during winter and spring, including one observation at same place last week.

Posted by יעל לנרד Yael Lehnardt at 17:48 No comments:

Second Half of Spring started right with a Black Diamond

We wish we had more but they seen to decrease rapidly:

On Saturday we went to search for a Black Bush Robin Cercotrichas podobe חמריה שחורה. It was found by a local  birder, Ophir Lotan, at Evrona Salt Flat. The place was absolutely empty but after we watched few Collared Doves and Bulbuls we found it! Lifer for our Swedish part of the team.
Northern Beach of Eilat- providing lots of nice birding hours:

Also visible migration is not what it used to be in March or early April.. Species are pretty different, not too many raptors are seen (the usual gap between Steppe Buzzards Buteo buteo vulpinus עקב מזרחי to Honey Buzzards Pernis apivorus איית צרעיםׁׁ) and the most prominent migrants around are more or less:

April 17th
The best. During a three days long "families birding Festival of Passover", just before all the mess starts, two smiling guys came back from the western nets, They had only two birds so it couldn't be the number of trapped birds that made them so happy... It wasn't. It was the Black diamond, The Black beauty, The queen of all black birds- Black Bush Robin..!
We were waiting for it very long, blamed to keep one in secret, it jumped into the nets before we had the chance to locate it while birding around.
After that, guiding hundreds of people in 38C seemed to be as easy and fun as eating a piece of cake!

A little more of the local atmosphere

What every volunteer is afraid of is the week of Passover- No fresh bread, no Pita bread, no Beers are alowed to be sold. Yet, we tried to enjoy the holiday by following the Jewish tradition of "Sedder Pessach". We read some of the "Hagada" and ate lots of wierd things; Matza bread, Hazeret, Haroset, Kneidalah soup and clearly didn't skip the tradition of drinking four cups of wine!
At the end we also searched for the "Afikomen"- Roni was the happy finder.

Bas Kok, our Duch volunteer, left the IBRCE on his way to ring few more birds in Israel by Lotan and the Jerusalem Bird Observatory.. Good luck and thanks for your time with us!

Posted by יעל לנרד Yael Lehnardt at 15:33 No comments: