Many birds are moving thru right now, waders and songbirds and the first of the raptors, three days ago we had a flock of 40 or so Black Kites mixed with few Honey Buzzards and over the last two days a single Steppe Buzzard, few Marsh Harriers and a Montagu’s Harrierand few more kite here and there.
On the evening of the 18th I went down to the ringing station for another swallow session, but as I came through the salt ponds a flock of 300 shorebirds was flying right across my usual netting area, my weak ringer’s personality quickly gave in. So I went back to bring up the nets, poles and pegs and started working. Over 800 waders were flying all over the ponds before darkness and by the time the wind became too strong (around 01:00) 35 birds were netted, combined with a successful walk-in trap round at first light for a total of 45 birds!
One of them being this shy Slender billed Gull (tick for me). 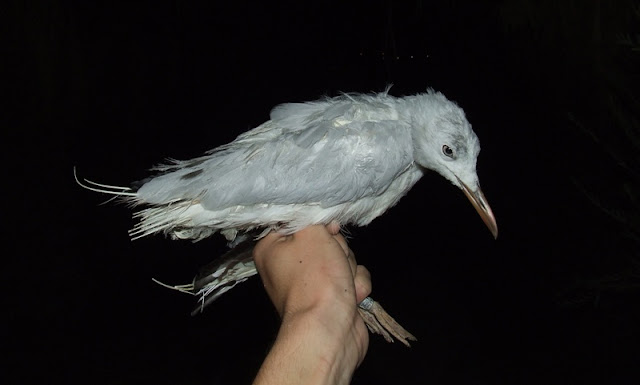 He was shy for a good reason: his feathers were completely worn out. And he seems to be in pretty bad shape overall: wing (or what was left of it) moult: 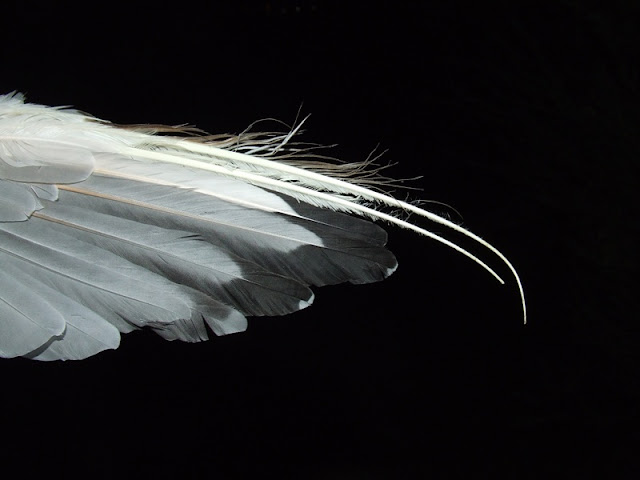 I had 2 of these cute Little ringed Plovers. 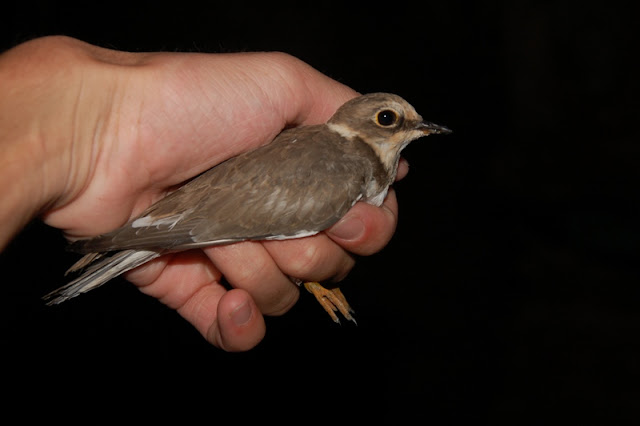 I came back the next day trying to replicate the success only to find that an amazing change occurred over night and most birds were gone. Luckily there was no wind at all so 21 birds were netted. At around midnight I was pretty surprised to find no less them a kingfisher in the nets! 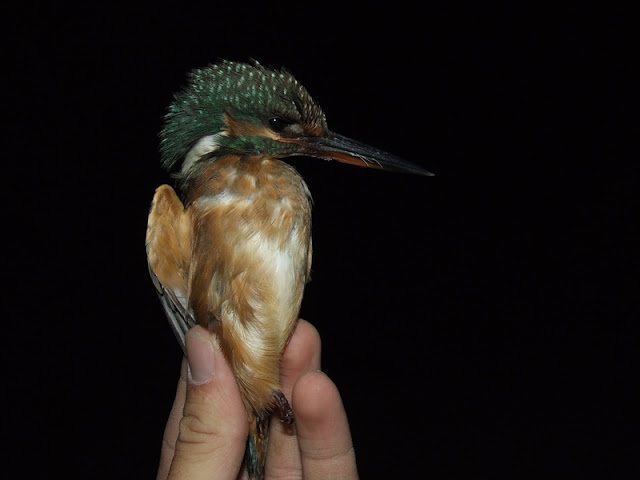 After a short sleep I woke up right into a true migration wave, the trees and especially the reed bed were buzzing with birds, As Itai and Re’a were away it was obvious something special was just behind the corner. And after some 60 warblers and swallows it came in the shape of this juvenile Rose-coloured Starling. 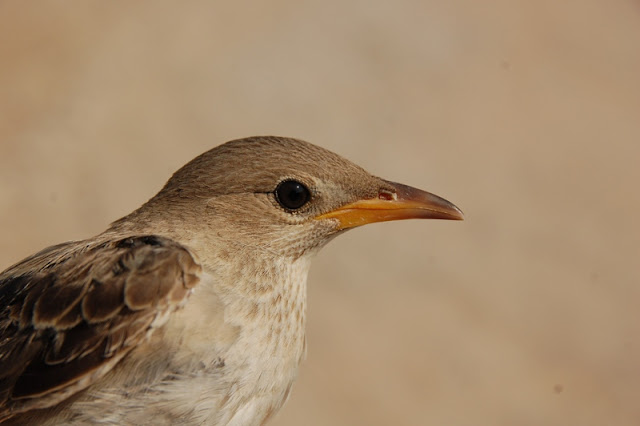 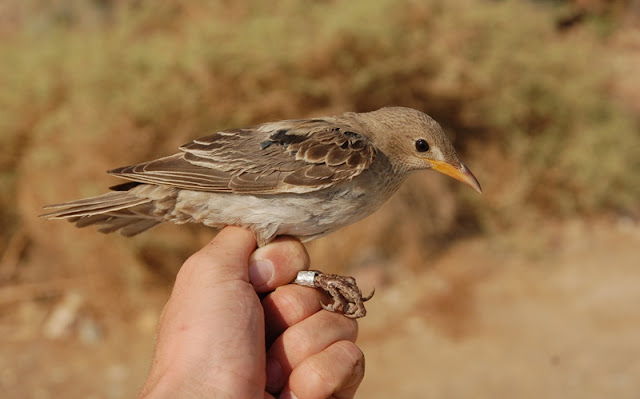 He was just starting a complete moult so it seems he will hang around for a while. 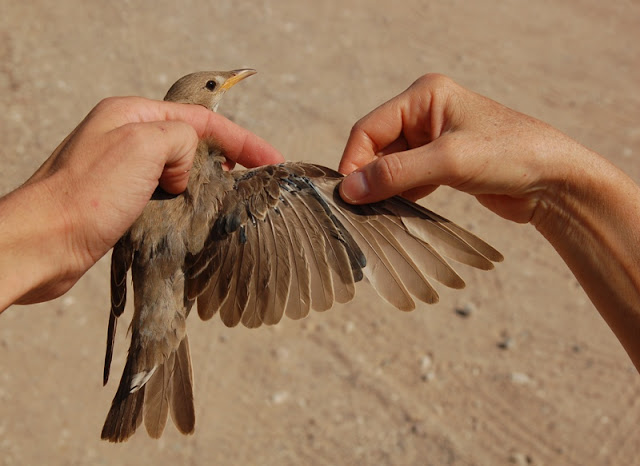 Other good birds from this week were a Golden Oriole from Saturday, later Tsadok and I went for a short time to k 20 salt ponds but they were rather empty of birds, only 200-300 waders well spread all over the area, but we were happy to see another Oriole on the way out. They are notorious for being very bad models and I am notoriously bad photographer so most pictures look something like this… 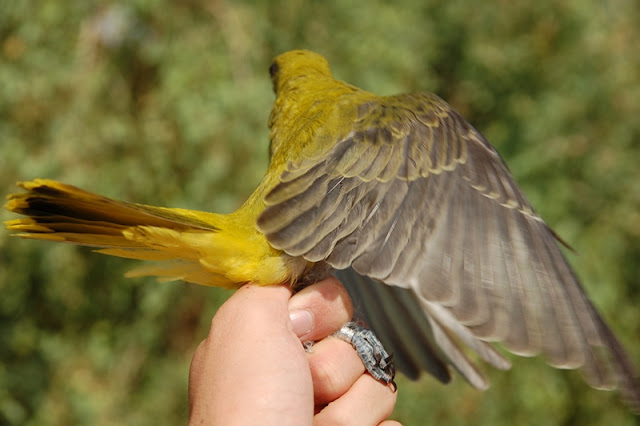 Portrait is the common sense way to come over both of these. 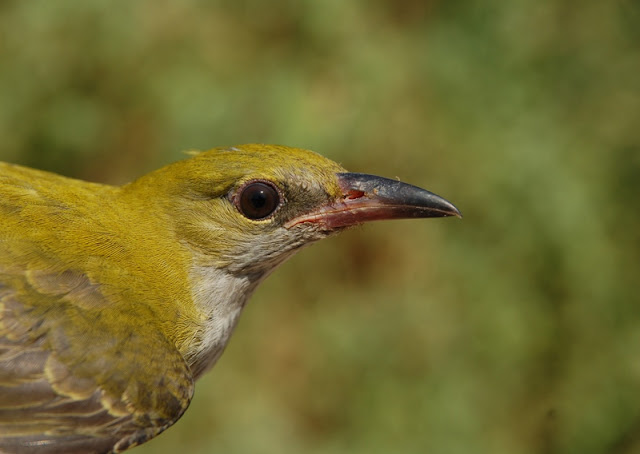 We were very busy yesterday with guiding no less then 10 groups at the ringing station, showing the people the birds and lecturing about bird’s migration, conservation of the old salt marsh that existed here 70 years ago and other stuff.  The second Whinchat for the season was a nice treat before the groups arrived. 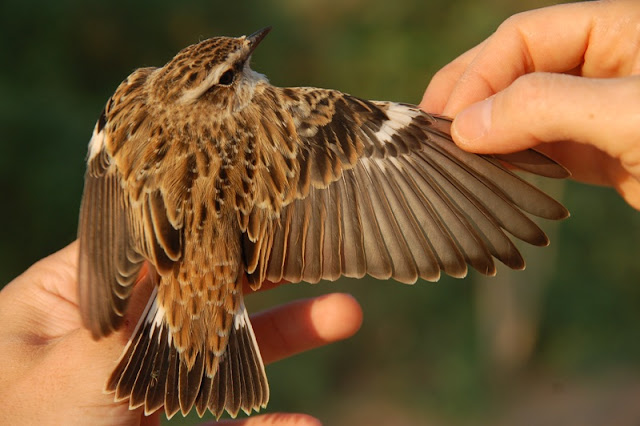 Re’a had a close encounter with a fat saw-scaled viper(highly venomous, be careful!)Right next to the ringing hut, later we released the fellow away from our hut. 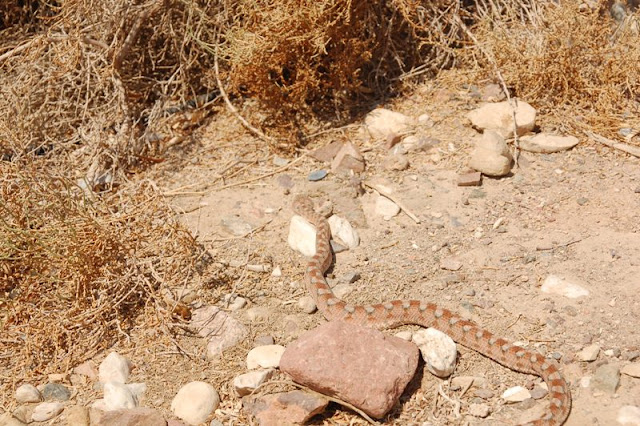 Today we had to close early (09:00) before 3 groups arrived to the park, but before that we ringed this cracking male ‘Supercilliaris’ like Yellow Wagtail. Those Yellow Wagtails will look even better when they will come back in spring. 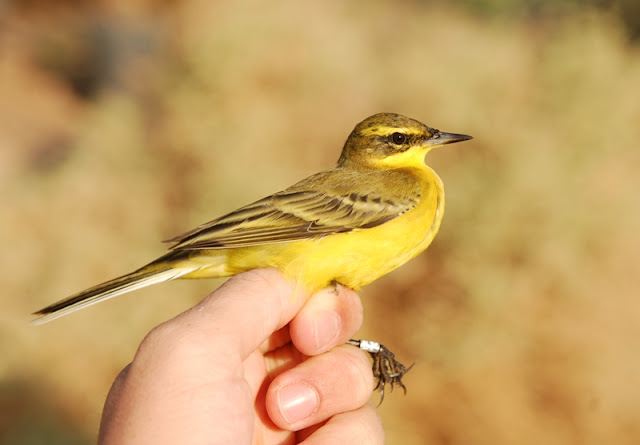 sorry for the long posts lately, they will be shorter and more often when i will have a decent internet connection.